Ben-Dror Yemeni is being too tempered in this piece about Amos Oz. I think that in this day and age, with the avalanche of vitriolic anti-Israel propaganda being piled upon the Jewish state, that anyone – even those who openly profess their zionism- who can be seen as throwing in with those who mean to do the Jewish state harm, should no longer be considered a friend of Israel, regardless of their credentials.

Op-ed: It’s okay to criticize the government in a way which can be accepted by most Israelis, but when this ‘criticism’ is mainly used by the campaign for Israel’s destruction – you become part of it.

Amos Oz will win the BDS campaign’s man of the year award. It’s strange, because the Israeli author is against the BDS movement. But he recently announced that he would boycott state-sponsored events around the world.

It’s sad because the Zionist Oz – an Israel lover, not an Israel hater – symbolizes the tragedy of the Israeli Zionist left.

During Operation Protective Edge, Oz made sensible comments which angered the radical left. Oz delivered two important lectures this year and combined them into one article, in which he laments what we are going through. He does not share the left’s illusions on the Palestinians. He does not disregard the right’s fears over what will happen here if there is an agreement. And he reaches the conclusion that there is no escape from pursuing an agreement and a separation. For our sake, he argues, for our sake. It’s a national interest. I support almost every sentence in the article. Occasionally, maybe not as often as I should, I write it myself. 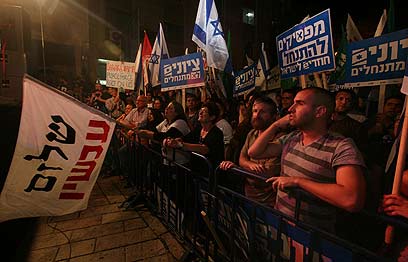 While the leftist camp has failed to bring peace closer, it has succeeded in bolstering the Palestinian rejectionist camp and the campaign for Israel’s destruction (Photo: Gil Yohanan)

And this is where the tragedy lies: Because the voice is Jacob’s voice, but the hands are the hands of Esau. You can’t make rebuking comments of a loving person, which can be accepted by most Israelis, including a large part of right-wing voters, and at the same time join Israel haters’ operation pattern.