Did the U.S. State Department issue a statement that:

“they would hope both sides, Turkey and the suicide-homicide bombing terrorists show some restraint, and de-escalate the cycle of violence?”

Between Ankara and Jerusalem: A festival of incitement and blood 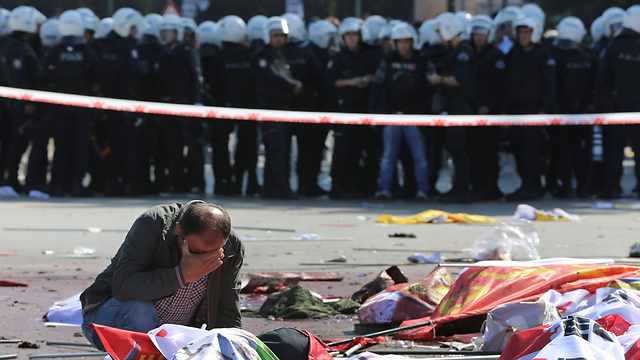 Suicide bombing in Ankara. The victims of this bloodshed are mostly Muslims (Photo: AP)

Op-ed: The recent suicide attack in Turkey and the attempt to resume the Palestinian intifada point to one common denominator: Wherever radical Islam raises its head, the result is destruction and bloodshed.

Let’s put the events of the past two weeks, the alleged intifada, aside for a minute and turn to another conflict which has erupted against in recent months – the conflict between Turkey and the Kurds.

There were a few years of silence. It didn’t last. In the latest elections, a moderate, non-separatist Kurdish party (HDP) – which does not specialize in provocations like Knesset Members Jamal Zahalka and Haneen Zoabi (both Balad) reached an impressive achievement.

Hundreds, perhaps thousands, have already been killed in the renewed violence. The Turkish army has been given a free hand. Entire areas are under siege. There is forced transfer of residents. There are merciless bombings.

What we are not seeing are countless rights activists, thousands of cameras and protests against what Turkey is doing to the Kurdish minority. We know the rule: When Muslims kill Muslims, there are no protests and no demonstration. After all, they must keep their strength to resume the protests against Israel.

On Saturday, there was an anti-violence protest in Ankara – a calm and quiet protest. The Kurdish party took part in it. But two explosions by suicide bombers led to what’s been described as Turkey’s worst terror attack in modern history. Nearly 100 people were killed.

The Kurdish party accused President Recep Tayyip Erdogan of incitement. That appears to be a baseless claim. It’s the last thing Erdogan needs. While he is using serious violence, the free world is keeping silent because it needs Erdogan in its battle against the Islamic State.

The thing is that the Kurds are the Islamic State’s biggest enemy. So whether the Kurdish party is right or wrong, this terror attack is an outcome of political, radical Islam, whether produced by Erdogan or by ISIS. It’s true that we are talking about a triangle in which everyone fights everyone – and my enemy’s enemy is also my enemy – but this is the reality of the region, which is also spreading to Turkey’s sane areas.

Why is this happening? Why are Muslims engaging in the mass murder of other Muslims? Many explanations have collapsed in the past few years. The attempt to search for logic is usually shattered when facing the facts, which refuse to obey theories.

But it seems that by looking at Turkey, which is wallowing in its own blood, and at the attempt to resume the Palestinian intifada – one common denominator can be found: Wherever radical Islam raises its head, the result is destruction and bloodshed. This applies to Jerusalem and to Ankara, to Nigeria and to Somalia, to Afghanistan and to Syria.