From Gates of Vienna

Living Under Anarcho-Tyranny
by Fjordman

On August 21, 2015, what could have become yet another Jihadist massacre of Europeans was prevented at the very last second. Not by the country’s authorities, but by random travelers. An armed militant Muslim on a train to France was overpowered by some of the male passengers, among them several unarmed American soldiers, just before he could start shooting people. Ayoub El Khazzani, a Moroccan national, has been charged with attempted murder of a terrorist nature.[1] The police believe had carefully planned a terror attack.

Mr. Khazzani was known to the security services prior to this incident.[2] Yet they still did not manage to stop him. He was able to move freely in the EU between different Western European countries. He joins the rising number of Muslim terrorists who were able, or in his case nearly able, to carry out terror attacks, despite already being on terrorist watch lists. Why? Because there are just too many Jihadists out there. The authorities cannot stop them all. French authorities are concerned about a truly spectacular Islamic terror attack, perhaps on the scale of the September 11 attacks in the USA in 2001.[3] 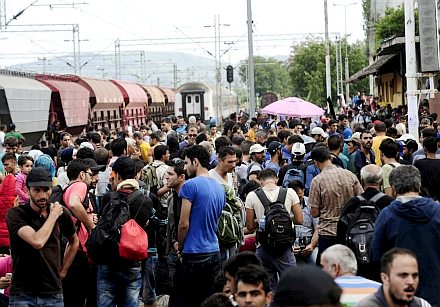 As a result of the stupidest policies in human history, over the past decades millions of Muslims have been allowed to settle as immigrants throughout the Western world. As a consequence, the number of militant Muslims has now reached critical mass. Inspired by the Koran and Islamic religious texts, and encouraged by groups such as al-Qaida and the Islamic State (ISIS), many of them are willing and able to murder us. Nevertheless, Western governments have not even tried to halt further Muslim immigration.

Literally thousands of migrants, asylum seekers and foreign opportunists continue to pour into Europe on a daily basis. Some of these are Muslims with more or less radical views. Statistically speaking, militant Muslims with potential or actual Jihadist sympathies stream into Europe every single hour, 365 days a year. They come on top of the many millions of Muslims and other alien nationalities who are already here.

Any official talk about “increasing security” is intended to deflect attention away from a disaster that has already happened: Muslims with potentially militant views are now present in cities all over Western Europe, from Ireland to Italy and from Finland to Portugal. Meanwhile, internal border controls across much of the European continent have been largely abandoned. The external border controls were weak to begin with. Under the massive strain of illegal immigration from Africa and the Islamic world, Europe’s external borders have nearly collapsed.

The authorities in the EU and Western Europe have for all practical purposes lost control over their own societies. They are currently incapable of providing even basic security to their citizens. Western ruling elites are desperately trying to conceal this fact from the general public. After all, if the authorities can provide no real internal security and no effective external border controls, then what is their legitimacy? What is their purpose?

Why do ordinary people even pay taxes, if those in charge are incapable of fulfilling any of their primary duties to the public?

The late American writer Samuel T. Francis introduced the term “anarcho-tyranny.” This describes a society that is simultaneously defined by chaos and by repression, “a combinationof anarchy (in which legitimate government functions—like spying on the bad guys or punishing real criminals—are not performed) and tyranny (in which government performs illegitimate functions—like spying on the good guys or criminalizing innocent conduct like gun ownership and political dissent). The result of anarcho-tyranny is that government swells in power, criminals are not controlled, and law-abiding citizens wind up being repressed by the state and attacked by thugs.”[4]