You can tell a Muslim apologist by the refusal to talk about, let alone admit, that the koranic doctrine of abrogation exists to keep the koran in its most hostile form. That’s what keeps Islam dangerous, and since it’s in the koran, and therefore codified into islamic law, it is therefore cast forever into iron, immutable. 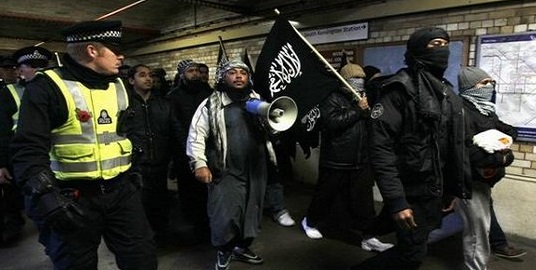 His key message to the PM is that a distinction MUST be drawn between Islam and Islamism. The former being a religion ‘much like any other’, and the latter being that evil -ism which is leading thousands of Muslims to join ISIS or take innocent infidel lives in some other way as ‘Lone Wolves’ around the world.

Yet – there is no such distinction between Islam and Islamism in reality – despite what our Muslim friends at Quilliam would like us to believe. Muslims who decide to blow people up do so for Islam – because they follow in the prophet Muhammad’s ‘teachings’ that:

Note that the martyrs of Islam are unlike the early Christians, who were led meekly to the slaughter.  These Muslims are killed in battle as they attempt to inflict death and destruction for the cause of Allah.  This is the theological basis for today’s suicide bombers.

By relying on Muslim apologists for Islam, such as Maajid Nawaz, the PM is still kowtowing to Islam. This argument masks the truth that the cause of ‘extremism’ and ‘Jihad’ is simply Islam – NOT some imaginary new doctrine called ‘Islamism’.  The terror threat we face, the battle we fight is against Muslims who decide to read the core texts of Islam literally – NOT with some new-fangled group of ‘Islamists’.

The distinction is completely dishonest – Muslims have been behaving just like ISIS since the days of Muhammad – where the Muslim ‘prophet’ led looting expeditions and ordered massacres of Jews. Muslims have been conquering vast swathes of land through the sword ever since. The last Muslim Caliphate before ISIS only died in 1922 – the Ottoman Empire.