Every once in awhile someone in the media dares to ask a hard question. It’s hard to sell something so inept, dangerous and loser of a deal (for the US and the free world), it’s no wonder Obama has tried to steer clear of press conferences.

During Obama’s sales pitch for the Iran deal, he lost his place, lost his temper and lost an opportunity to convince those who were not with him.
By: Lori Lowenthal Marcus
Published: July 16th, 2015 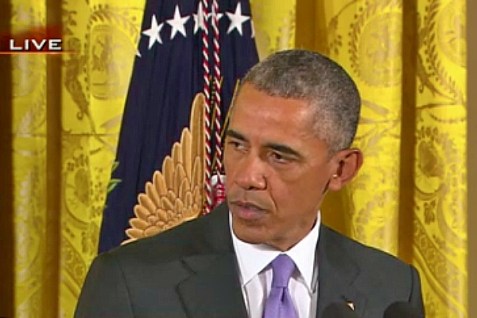 After the thunderstorm of criticism launched almost immediately after the Iran deal was announced on Tuesday, July 14, President Barack Obama held a press conference the next day, in an effort to quell the storm and sell the deal.

It did not really work.

For one thing, after a brief, assertive pitch in which Obama relayed “yesterday’s historic, comprehensive” deal, accomplished with “our allies…and partners” – more on that word* below – the deal “cuts off all pathways to Iran’s nuclear weapons program.” The president reiterated the same points he made at the press conference announcing the deal, and then he opened it up to selected media representatives for questions.

The first journalist called on, Andrew Beatty of the AFP, asked whether the deal would lead to a more moderate Tehran. The president then did something incredibly odd.

Obama said he was sure Beatty would forgive him, but he just wanted to tell everyone…and then he launched into another, fuller version of his just-completed – we thought – sales pitch.

The twittersphere exploded with comments, many wondering if something happened to their news feeds.

After about ten minutes of grinding away at the same points he made the day before and even just moments before, the president seemed to remember he was in the middle of a press conference and had already begun allowing questions.

The answers to the questions posed were simply replays of his Iran deal talking points – no surprise, that’s why he was holding the press conference.

But then everyone tuned in to watch the press conference, and everyone in the briefing room, watched as the president revealed his fury at a journalist who dared to do his job and ask a tough, pointed question.

The question came from Major (that’s his first name) Garret, from CBS. Garrett pulled himself up, shoulders back, and asked about the American hostages being held in Iran. Obama did not like it. Not one bit.

Here’s the question: “As you well know, there are four Americans in Iran, three held on trumped-up charges, according to your administration, one whereabouts unknown. … Can you tell the country, sir, why you are content with all the fanfare around this deal to leave the conscience of this nation, the strength of this nation unaccounted for in relation to these four Americans?”

“Content?” Obama spat out, while fixing Garrett in his steely gaze. Obama than incredulously restated Garret’s question as if it were why he was out celebrating the deal while American hostages were still being held.