The Israeli blog, Israellycool has been going head to head with the BDS dead head, Roger Waters, for some time now, it’s great to see GOV taking him on as well.

The following guest-essay by our Australian correspondent Julius O’Malley is the first installment of a two-part examination of the Boycott, Divestment and Sanctions (BDS) movement and one of its most prominent celebrity spokesmen. 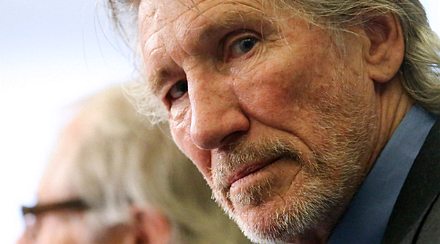 Roger Waters and the BDS Movement
by Julius O’Malley

For some decades now the principal battleground in the 90[1] year long Arab-Israeli conflict has been in the West — winning the hearts and minds of the populaces of the democracies and, through their governments, bringing pressure to bear on Israel to do certain things such as withdraw from the West Bank. One newish weapon is the 2005-founded Boycott, Divestment and Sanctions movement, which aims to bludgeon Israel into doing what the people who founded BDS — said to be from ‘Palestinian civil society’ — want by means of punitive trade, economic and financial measures and cultural, educational, sporting and scientific boycotts. The Ramallah-based BDS aims to achieve what the Palestine Liberation Organization and Israel’s Arab neighbours have failed to achieve militarily for more than half a century: destroy Israel as a Jewish state. It has succeeded in damaging Israel’s economy and contributing to the further international ostracism of Israel.

The most prominent Western face of the BDS movement is Roger Waters, the former principal lyricist, composer, bassist and co-vocalist of the famous ’70s rock band Pink Floyd and since a very successful solo artist. In Waters’ words the BDS:

“… aims to end Israel’s occupation of the Palestinian territories, to secure equal rights for Palestinian citizens of Israel, and to uphold the right of Palestinian refugees to return to the cities and villages they were violently forced out of in 1948 and 1967.”

Waters’ last point, the “right of return”, is crucially important to understanding the BDS agenda. Its co-founder, Omar Barghouti, has stated that even if Israel withdraws from the whole of the West Bank, i.e. to the 1949 Armistice Lines, the BDS campaign will continue until the “right of return” is fully realized and the returnees are back in “their properties”. Barghouti has stated that Israel should not exist; the BDS openly supports a one-state, not a two-state solution.

Barghouti was born in Qatar in 1964, raised in Egypt and moved to the West Bank after completing his first master’s degree at Columbia University. He obtained his second master’s degree at Tel Aviv University — yes, you read that correctly — and is presently studying for his PhD there. BDS chapters in the UK and the USA campaign vociferously for the severing of all interaction between their tertiary institutions and Israeli ones.

In his 2010 tome “Boycott, Divestment and Sanctions: The Global Struggle for Palestinian Rights”, Barghouti quotes approvingly a South African petition “[which] did not mince words in condemning the complicity of Israeli academic institutions in violating international law ‘While Palestinians are not able to access universities and schools, Israeli universities produce the research, technology, arguments and leaders for maintaining the occupation’” and also quotes Desmond Tutu (for the umpteenth time) : “It can never be business as usual. Israeli Universities [sic] are an intimate part of the Israeli regime, by active choice”. Ignore the nonsense about active choice, for the time being, so as to stay on track.

Questioned about his apparently hypocritical choice of institution to study at, Barghouti dismissively states that it is a personal matter and refuses to comment. There are seven, Israeli-established, universities in the West Bank — there were none in 1967. A recent petition to expel Barghouti from Tel Aviv University failed. Maybe he planned to write a book about how badly treated he was at TAU by Jews when he did his master’s there, but wasn’t sufficiently oppressed and thus had to enroll in a PhD program. Maybe Barghouti will do a second PhD at TAU after he’s completed the current one, hoping they will summon the good sense to expel him and he can then, having finally attained the victim status denied him by his Qatari-Egyptian background, squeal “racism”, “discrimination” and “apartheid”.

More here at Gates of Vienna (thankfully who are back online!)