All the other macabre butchery done by them, well that’s ok.

Which goes to show that trying to stay out of a conflict raging around you with the hope that you’ll go unnoticed, is a wrong strategy, arming yourself to the teeth and training yourself for an eventual fight, is the only option. 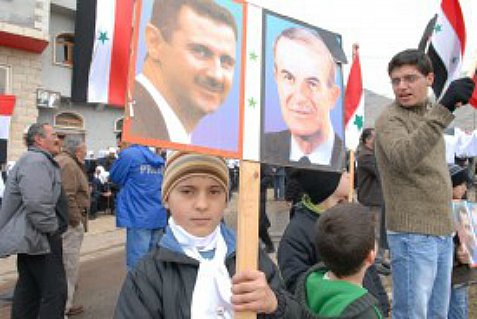 Druze from the Golan Heights gather in the village of Majdal Shams holding up signs of support for Assad. (Archive: 2012)
Photo Credit: Flash 90

The Jabhat al Nusra Syrian rebel group stated on Saturday that the members of its organization who massacred 20 Druze civilians in Syria’s Idlib region last week will face trial in an Islamic Court, according to the Lebanese TV station, MTV.

Al Nusrah said the killings were a violation of orders and the killers would be punished.

The Al Qaida-affiliated al Nusra group want to portray themselves as the liberators of Syria and a more moderate Islamic alternative than ISIS. They have made it a point of not forcing their Islamic views on areas they captured.

But it may too little, too late, as reports in Arab media indicate that the Druze community have begun organizing, and will be joining Assad’s side in the Syrian civil war.