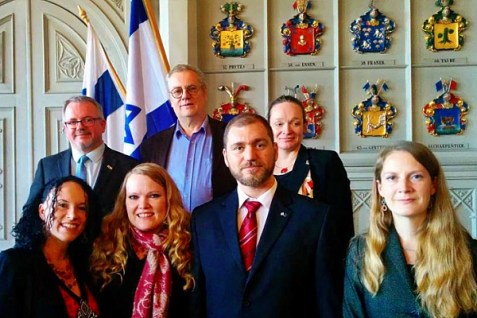 Finland excluded the centrist JNF from its “World Village Festival,” but the pro-Israel forces did not take that sitting down.

Sometimes horrendous actions spawn unintended positive results. Like when a grossly anti-Israel, baseless singling out of Israel for humiliating exclusion from an ostensibly open international festival inspires a new pro-Israel organization that is eager to stand up for Israel.

Every year for the past 15 years Finland hosts an event they call a “World Village Festival.” Think World’s Fair on a smaller scale. There is always a theme for the year’s event. In 2015, the focus was on development in Africa and the Middle East. The festival took place the third weekend in May.

KEPA, which is the acronym for the Finnish word that translates to Service Centre for Development Cooperation, is the organizer of the event. KEPA services Finland’s NGOs, and while politically and ideologically independent, it operates with funding from Finland’s Ministry for Foreign Affairs.

KEPA describes its World Village Festival as being “open to all and a meeting place offering tastes of different cultures and surprises from all over the world.”

The Jewish National Fund (the Keren Kajemet LeIsraeli’in, or KKL in Hebrew) which has an active presence in Finland, signed up to participate in this year’s World Village Festival, just as it has done for the past two years.

But this year a virulently anti-Israel organization, ICAHD, noticed JNF’s requested presence at the WVF and complained that such an organization which engages in “ethnic cleansing,” is an Apartheid supporter and engages in “greenwashing.”

ICAHD stands for Israeli Committee Against Housing Demolitions. Just a few points about ICAHD: one, it apparently does not even have a presence in Israel any longer, according to NGO-Monitor, and its primary activity appears to be championing the BDS movement.

ICAHD, according to the pro-Israel Finnish website Tundra Tabloids, pressured KEPA into disinviting the JNF. The WVF organizers then informed JNF it could not participate “due to questions about the legality of its activities,” which included the various outrageously false claims promoted by ICAHD, which were given the imprimatur of the academy, by Hannu Juusola, Professor of Middle Eastern Studies, University of Helsinki.

The head of the Finnish branch of ICAHD, Skysy Räsänen, crowed that banning the JNF was “a victory for the BDS movement.”

KEPA also pointed to testimonies by, amongst others, Rabbis for Human Rights, as justification for banning the JNF.

While the JNF was mild in its response, there were some who were less so.

One organization, a brand new pro-Israel group that calls itselfVOIS – Voice of Israel in Scandinavia, is a spin-off from a larger pro-Israel organization. 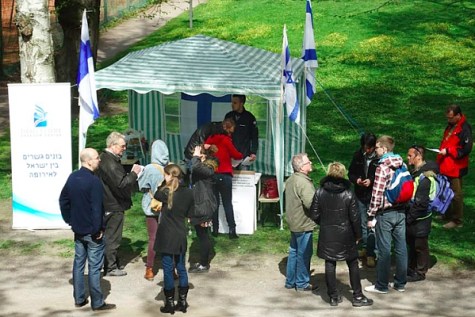 VOIS was galvanized by the rejection of JNF from the Festival. It set up a presence outside the gates to the Festival, and handed out pro-Israel literature, engaged with those entering the Village, and directly challenged the organizers of the event on the JNF ban.

One member of the group marched into the Village and spoke directly to Jonas Bistrom, KEPA’s development policy specialist. This VOIS member, Kenneth Sikorski, sought to engage Bistrom about the exclusion of the JNF from the Festival. Specifically, as Sikorski told the JewishPress.com, Bistrom was asked whether the WVF asked the JNF for a response to the allegations leveled against it, before the decision was made to exclude the pro-Israel organization. Sikorski also pressed Bistrom on whom KEPA had relied in making the exclusion determination.

Although Bistrom would not answer Sikorski’s queries, by the time the VOIS member returned to his encampment outside of the Village, KEPA’s executive director Timo Lappalainen had already been there and confirmed to the folks staffing their booth that Juusola, the professor from Helsinki University, a “respected academic” encouraged JNF’s banning because it “supports Israeli Apartheid “and “engages in ethnic cleansing.”