”Don’t say German National Socialism, for in doing so it gives the impression that being German motivates people to war, terrorism and other crimes.”

Yesterday, upon the air,
I heard a word that wasn’t there.
It wasn’t there again today,
I wish that it would go away…

(With apologies to Hughes Mearns)

In his report yesterday on the latest OSCE conference, Henrik Ræder Clausen included this summary of a dominant meme among ideological leaders in the West:

Panel members stressed the importance of not calling the Islamic State the “Islamic State”, for doing so could give the impression that Islam motivates people to war, terrorism and other crimes.

The avoidance of the I-word seems to have become a fixation in the revolving-door world of NGOs and state functionaries, particularly in Europe. It’s as if all the participants have been mysteriously hypnotized, and now wander around glassy-eyed, muttering the phrase “nothing to do with Islam” over and over again, their repetitive chant forming a background susurrus at every international function where important people assemble to hand down momentous policy decisions.

A notable example of the mindset may be found this handout from the OSCE Vienna meeting: 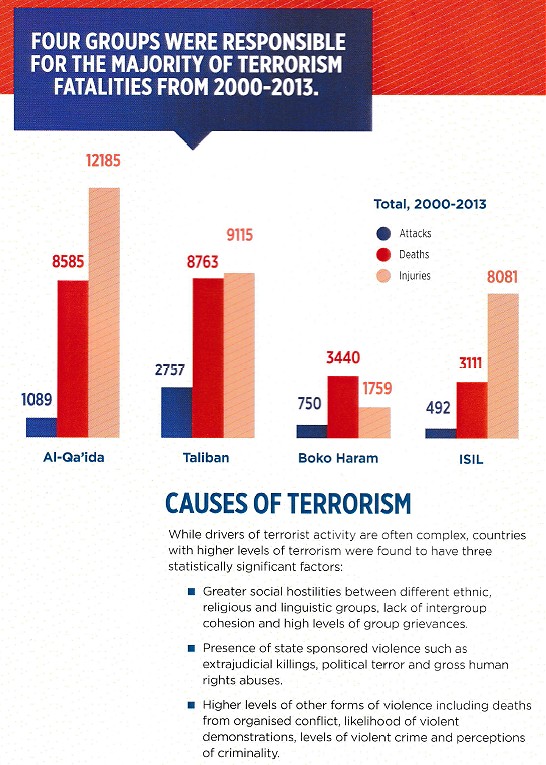 The four terrorist outfits shown in the chart are composed of different ethnic groups, operate in geographically separate areas, represent disparate cultures, and speak a variety of languages. The only thing these groups have in common is the word that wasn’t there.

When required to identify a common ideology, Western bien-pensants prefer to discuss “extremism” or “radicalization” — modifiers with no substantive objects. If cornered, they may refer to “Islamism” or “radical Islam”, but never plain old unmodified ISLAM.

It seems that a prerequisite for receiving funding from any government agency or charitable foundation is the absolute refusal to consider Islamic political ideology as an explanation for anything bad that happens in the world.

You can’t say that, old chap. It just isn’t done.