“The misquote seems to have started as a bit of sloppiness, but it took on a life of its own because a lot of people really wanted it to be true,” Omri Ceren of the Israel Project told the Examiner.

Ceren maintained that there is bias working both ways and that some of it may be calculated to drive a wedge between conservative factions.

“There’s a sort of campaign going on right now to portray the Vatican as anti-Israel and to poison Jewish-Catholic dialogue,” Ceren told the Examiner. “Certainly that had nothing to do with the initial reporting, but it helps explain why the easily-debunked quote spread so quickly.” 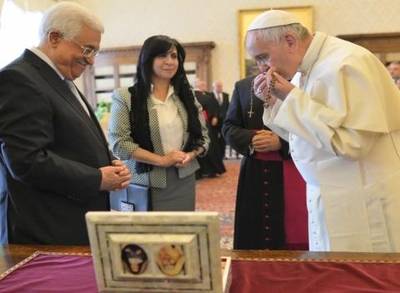 Pope Francis and the Middle East: Why do reporters get these two subjects so wrong?

Some media watchers allege that the frequency with which newsrooms misreport on both the Middle East and Pope Francis is due to laziness, bias, wishful thinking or a combination of the three.

“Until journalists recognize their prejudices, which may in many cases be subconscious and therefore hard to acknowledge, I doubt the situation will improve much,” Tom Gross, a former Sunday Telegraph Middle East correspondent, told the Washington Examiner’s media desk.

Though news organizations dispute charges that their reporters harbor bias in stories on the Vatican or events in the Middle East, a dustup this weekend involving comments that the pope supposedly made to the leader of the Palestinian Authority has raised questions of why newsrooms so often get tangled up in reporting these topics.

This weekend, when the supreme pontiff met Saturday with Palestinian President Mahmoud Abbas, initial reports on the meeting between the two leaders stated that Francis called Abbas an “angel of peace.”

This claim, which was pushed out by major newsrooms including the Associated Press,Agence France-Presse, the New York Times,Reuters and the BBC, resulted in an online furor among pro-Israel groups that saw the pope’s praise for Abbas as inexcusable.