This is also the same event that banned the Finnish branch of the Israeli JNF NGO from attending, after they have been present for two years running.

According to private sources, it’s claimed that the Finnish branch of the anti-Israel ICAHD organization, co-chaired by Skysy Räsänen and Bruno Jäntti, was instrumental in getting KEPA, (umbrella for Finnish ngo’s) to exclude the JNF from the World Village. Now they’ve come after FREE SPEECH, in banning the venue of cartoonist, Ville Ranta, citing ”security reasons”.

NOTE: While one could perhaps posit a reasoned defence for the decision to nix the free speech event ”due to families and amount of people expected (80 000) becoming a security risk”, no one can defend the government’s entirely political decision of not allowing Swedish professor of art, Lars Vilks to show his drawings inside the Finnish House of Parliament due to ”security risks”, when afterwards the organizers found a willing restaurant located in a park five minutes away from the seat of government.

UPDATE: Scroll down after the first article for more.

World Village (Maailma kylässä) is a Kumbaya event that celebrates diversity. Pictures of Mo aren’t welcome due to security concerns. There is no better way to demonstrate the total bankruptcy of multi-culti ideology.

World Village Festival is not holding any ”Freedom of expression village” this next weekend in Kaisaniemi. It will be cancelled for safety reasons.

Freedom of expression village-fair stand was intended to introduce parts of I’m Charlie exhibition and the artist Ville Ranta’s drawings. Samples among the images would have been drawings also of the prophet Mohammed, which have caused by, inter alia, the Paris and Copenhagen terrorist attacks.

– People’s security in an organized event is for us the most important thing. We make every effort to ensure that the festival security risks are minimized, explains the festival organizing KEPA’s program director Outi Hannula.

She explains that Kepa asked for police protection opinions and advice for the freedom of expression village, and on the basis of threat assessment by the police, it was decided not to have pictures of Mohammed in the middle of a large public event.

– We also studied the possibility of investing part of the exhibition located close to the interior, but they came to the same conclusion, and the images were not desired for security reasons, says Hannula.

The Freedom of expression village was to take place in Kaisaniemi in the middle of the festival area.

World Village Festival is not the only place where safety factors have reduced or prevented the event.

I am Charlie exhibition was closed in March Arabianranta Library in Helsinki, as security measures were not sufficient for the owner of the property. In addition, the well known Mohammed portraits of Swedish artist Lars Vilks were not allowed in parliament, because the Security Police said the threat to security was too high.

– Freedom of expression is important for us, but we believe a major event designed for families with children is not the right forum to bring it out specifically through the provocative Mohammed images. Freedom of speech, for example, Russia’s deteriorating freedom of expression situation, however, is treated in many editions of the festival program, Hannula says.

World Village is one of the biggest festivals in Finland and the largest organizing, development and multicultural event. To be held in Helsinki, the festival’s attendance has more than 80 000.

The organizers of the Freedom of expression village were  of Culture, opinion polls and scientific journals Federal Cult, The Finnish Union of Journalists, Finnish PEN, Reporters without Borders, Communication and Development Foundation Vikes and the Electronic Frontier Finland – Effi Association and the Haaga-Helia University of Applied Sciences Journalism.

NOTE: This is the first Mo-toon drawn by a Finnish artist for publication in Finland: Finnish tabloid Iltalehti (h/t: Kumitonttu) reports that the organizers for the Free Speech Village are very disgusted and upset for being excluded from the event.

Mohammed pictures banned from festival in Helsinki – “the terrorists have won”

Cult Association’s Chairman, author, Ilkka Lehto  says that the terrorists seek intimidation to silence the people, and have succeeded. 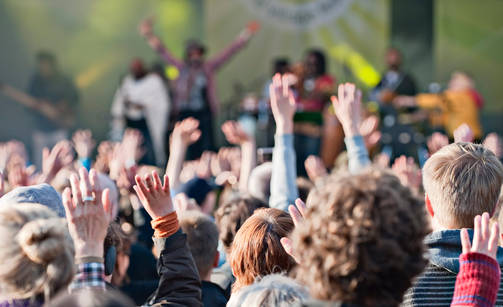 World Village -festarin freedom of expression in the village was abandoned for safety reasons. The festival will be held 23 to 24. May. (INKA Soveri)

This coming weekend held in the Railway Square and Kaisaniemi park in the Helsinki World Village Festival, the program Freedom of Expression Village site has been removed. There was supposed to be present an ”I am Charlie” exhibition and a series of artist Ville Ranta’s works. The exhibition is the drawings of Prophet Muhammad.

According to the festival umbrella organization KEPA organizing  the event, the  Freedom of expression village was abandoned for safety reasons. Festivals are held outdoors in open space. Kepa made its decision on the basis of the Security Police’s threat assessment.

“I am extremely disappointed”

Cult Association’s Chairman Ilkka Lehto Hill has organized freedom of expression camps for a long time with many other organizations and actors.

Included in the exhibition will be the same type of cartoon images published by the Charlie Hebdo magazine which was the scene of a terrorist attack in Paris in January, which killed 12 people. The publication of the Mohammed’s images has been followed by terrorist attacks and attempts.