US accusations of Israeli espionage – why now?

Analysis: The Obama administration has launched a media blitz against Netanyahu, fearing a narrow right-wing government that could be a potential ‘nightmare’ for the US.

The accusations from the US over Israeli espionage, published Monday in The Wall Street Journal, are unfair and even a little ridiculous.

The American administration and the government official who leaked the information are well aware that Israel is capable of obtaining this information in a completely legitimate manner from those party to the negotiations with the Iranians, as well as through other legitimate means within the intelligence community. It is no secret that Israel has its ways of knowing what is happening in Iran and in the talks Iran and its representative abroad are conducting. 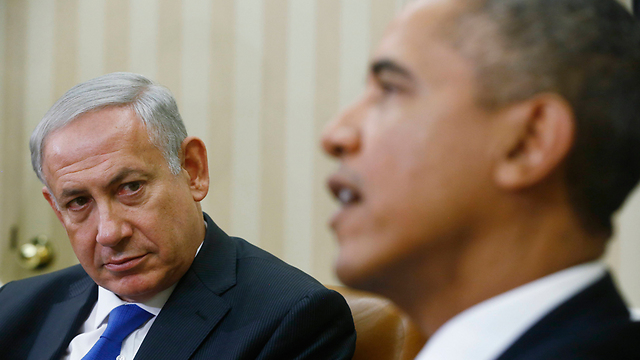 Netanyahu and Obama at the White House, September 2013 (Photo: AP)

But beyond the question of fairness and morality, it is important to understand that the reports of alleged Israeli espionage are part of a campaign waged by the United States, with a clear political purpose. This is not just a political vendetta against Benjamin Netanyahu, but a calculated political move by the Obama administration that was planned long before the Israeli elections, in case Netanyahu won.

Netanyahu is facing a media blitz against him being managed by the White House. His speech to Congress, the announcement there would be no Palestinian state during his tenure (that he has that he has since walked back), and his comments against Israeli Arabs, for which he apologized on Monday, all provide the administration with ammunition to discredit Netanyahu, and insult him as the US president was insulted when the prime minister defied him and went to speak in Washington.

Behind this media campaign, the administration is hiding deep concerns regarding two issues: the danger that Israel will torpedo the nuclear agreement with Iran and the fear that a narrow right-wing government in Israel will lead to an even larger and more violent conflict with the Palestinian Authority and Hamas in Gaza.

The US is worried that a defiant right-wing Israeli government will push it to veto all kinds of resolutions at the UN as well as those by American allies in Europe, and, even worse, spark a conflict with many American Jews. Senior Democratic Party officials have warned Obama not to allow Netanyahu to cause a rift with the Jews who will support the party in the next presidential elections in 2016.