NOTE: Gatestone linked to this article and due to my making contact with the author, is presently undergoing a change to its text to properly reflect the political nature of the blog, as a conservative website.

So are the Helsinki police going to follow the Swedes and Norwegians and Brits and hide the fact that they were Muslims, an I lay odds they’re from the same country as the last batch of rapists, of the poor woman on Viking Line ship between Finland and Sweden last month. H/T: Fjordman: who sends the following from Avpixlat

Police are investigating yesterday in Helsinki Tapanila, where an outrageous rape of a young occurred woman. Police are looking for clues from the general public in relation to the case.

According to police, the victim got on a train at about 21.10 on the way to Helsinki from a Tikkurila commuter train when a set of boys began to harass her. According to police, the woman got off the train at the Tapanila station at about 21h15 and started to walk home. The boys on the train who were harassing followed the woman, and continued to harass. Police are investigating the case now as an aggravated rape.

– Currently in custody are five people of foreign background, who are 15 to 18 years of age. The investigation is just beginning, and we are trying to focus, as well as on the course of events that the people arrested are connected to, says Detective Chief Inspector Jyri Hiltunen, ofthe Helsinki Police Department.

Persons are requested to contact the police and report what they saw, of  the harassment on the train and at the station Tapanila to either in person or by e-mail address seksuaalirikokset.helsinki [at] poliisi.fi or telephone number 0295 471 612 (Mon-Fri 9-15).

UPDATE: Perps first day in court before the judge The suspect’s weeping mother removed from the hall 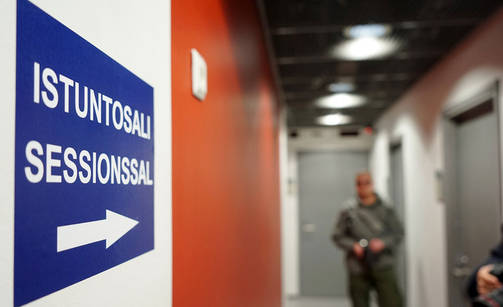 A young woman’s rape  that occurred Tapanila was discussed in court today.

According to the Iltalehti’s photographer at the scene, the suspects had plenty of relatives and friends. (JOHN Palmen)

Police suspect the five from 15 to 18-year-old boys, of aggravated rape. Police said Friday afternoon that all suspects have been detained.

The rape took place on Monday evening in Helsinki Tapanila near the train station.

The first person detained to be presented was of full age. His mother was involved in the district court hearing, but the judge was forced to remove the crying woman from the Chamber. According to the Iltalehti’s photographer at the scene, the suspects had plenty of relatives and friends. According to him, plenty of people went into the Chamber, but they soon came back out of the room with the crying woman in tow.

The deadline for bringing charges against the defendent is Wednesday, April 15, 2015. The case will be tried behind closed doors. ILTALEHTI