My exchange with Amnesty’s Director of the Middle East and Africa reveals the exact same thing here. He couldn’t handle the heat and took for the hills.
— TundraTabloids (@KEGS59) March 3, 2015

@SunjeevBery@FrankAmnesty Not in question, but your refusal to hold states accountable to chapter 7 UNSCR 1373 is. don’t evade the point. — TundraTabloids (@KEGS59) March 3, 2015 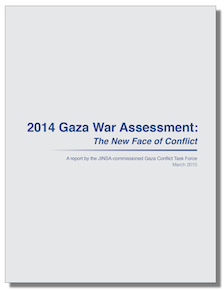 The authors know the Laws of Armed Conflict far better than the NGOs do. They recognize Hamas’ unique tactics of cynically putting their own civilian population in danger in order to add a public relations dimension to what they call “unrestricted warfare”:

In 1999, two Chinese People’s Liberation Army officers asserted  that the ability to blend technologies with military actions and political-influence activities, a technique they dubbed “unrestricted warfare,” signifies a new type of war, in which a key principle is “no longer using armed force to compel the enemy to one’s will, but rather, using all means, military and nonmilitary, lethal and non-lethal, to compel the enemy to accept one’s interests.”97 In the 2014 Gaza War,

Hamas appears to have pursued precisely such unrestricted warfare. Their concept of operations aimed to force Israel into making concessions – such as reopening Gaza’s borders – as a result of political pressure. What was novel about Hamas’s approach, however, was where and how they sought to create that pressure. A key vulnerability for liberal democracies, such as the United States or Israel, is their citizens’ aversion to excessive or unjustified casualties. Though voters are willing to support wars – and casualties – that are perceived as legitimately defending the homeland or securing vital national interests, popular support for military operations can decline when these goals begin to be doubted or overshadowed by deaths of civilians from the opposing side and, especially, of their own soldiers. …