He was a racist like many of his party before and after him.

Democrat history lesson 101. Just think some 6 decades later with Barack Obama and his party using the Latinos (+illegal aliens) to pad their membership in much the same way as Johnson and the DNC did with the Black vote.

NOTE: Only a renewed interest in individualism, instead of thinking in packs (tribalism), will break the backs of the statists who manipulate the electorate. 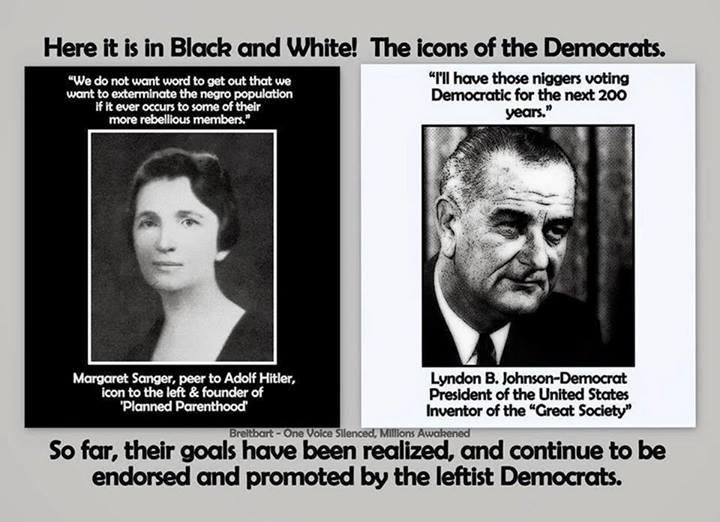 Lyndon Johnson was a civil rights hero. But also a racist.

In Senate cloakrooms and staff meetings, Johnson was practically a connoisseur of the word. According to Johnson biographer Robert Caro, Johnson would calibrate his pronunciations by region, using “nigra” with some southern legislators and “negra” with others. Discussing civil rights legislation with men like Mississippi Democrat James Eastland, who committed most of his life to defending white supremacy, he’d simply call it “the nigger bill.”

Then in 1957, Johnson would help get the “nigger bill” passed, known to most as the Civil Rights Act of 1957. With the 1964 Civil Rights Act and the 1965 Voting Rights Act, the segregationists would go to their graves knowing the cause they’d given their lives to had been betrayed.

NOTE: What is amazing is that Johnson and his party managed to get away with one of the biggest frauds committed on a people desperately needing a fair shake after, slavery, reconstruction and segregation. The Black community, at least that portion kept on the Dem’s plantation within the inner cities, are made dependent on gov’t (Democrat) largess and vote Democrat to keep entitlements flowing. This incestuous relationship has to be broken if the country is ever to move beyond the racism issue.