The three were caught in late December of 2014, and appeared on a state TV program saying that the crossing of the border from Russia into Finland wasn’t difficult at all. Well now it’s come to light that they (at least one of them) was scoping out the route for future smuggling of illegal aliens, and I assume from Syria. 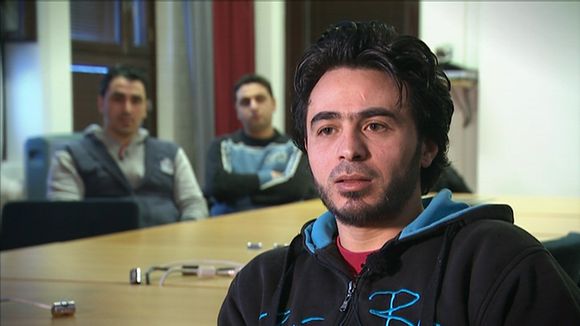 The men were interviewed at the Joutseno reception centre. Image: Jussi Mansikka / Yle

Finnish officials say they are hoping to pass the case of the three Syrian men on to prosecutors for consideration of charges within one month. Investigation chief First Lieutenant Juha Vuorjoki of the Finnish Border Guard said his team is still awaiting additional information from Russia before the case can be handed over to prosecutors.

On December 31, border officials were summoned by the owner of a Kitee guest house when three Syrian men sought help from his establishment after crossing the border from Russia on foot.

At the time the temperature was -25 degrees Celsius and one of the men suffered frostbite burns to his feet. The men said they had not received any outside assistance and that they were seeking asylum in Finland.

According to Vuorjoki, a Russian border patrol picked up another three men in the Russian border zone of Värtsilä on January 22, as they also attempted to cross the border into Finland on foot.

Officials now suspect that the men who entered Finland at the end of December were involved in organising the illegal entry of the second group in January.

One man suspected of spearheading the illegal entry was detained for questioning last week as part of the investigation.

He and the two others who entered the country in December are awaiting the processing of their asylum applications.