This is no news to us who follow these issues.

The following story is reminiscent of the time when Hamas met with candles burning because of a supposed lack of electricity,….. 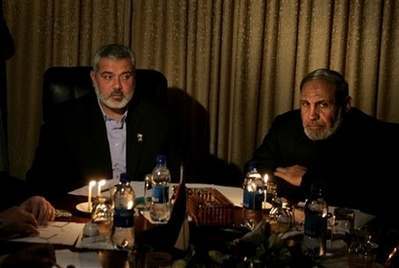 ….in spite of the fact that they actually had electricity and had met in the middle of the day (in a later shot that uncovered their PR stunt) that the international media dutifully reported.

Lessons learned by the Daily Mail: 1. There are no dams in southern Israel with which to intentionally flood Gaza; 2. Nablus and Jenin are not “two of Gaza’s major West Bank cities.” Honest Reporting, an NGO that according to its website “monitors the news for bias, inaccuracy, or other breach of journalistic standards in coverage of the Arab-Israeli conflict,” took screen shots of the article before amendments were made.

However, after amending the article’s headline to remove the charge that Israel was responsible for the flooding, the pretense for the charge — official Palestinian accusations of the charge — remained.

“Brigadier General Said Al-Saudi, chief of the civil defense agency in Gaza, said that the dams were opened without warning.”

This quote from the chief of the civil defense agency in Gaza remained in the article even after the article’s headline was altered.

Libby Wiess, the Head of IDF Spokesperson’s North American Media Desk, was quick to fire back at Vice News.