Just like the Arab/Muslim block in the UN behaves vis-a-vis Israel. 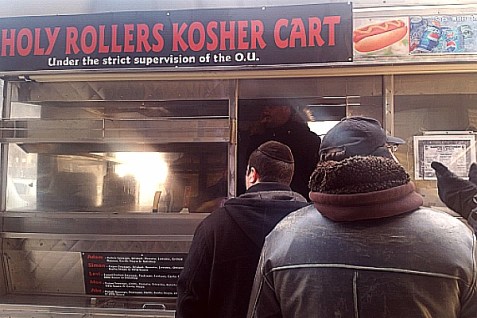 The idea was just too tempting. When there were reports of territorial animosity and whose “higher authority” was really higher as between Halal-observant Muslim food cart vendors and a Kashrut-observant Jewish food cart vendor, the need to cast the animosity as reflecting the Middle East conflict was too strong for some  to resist.

But in order to help avoid a real religious conflict where none currently exists, The Jewish Press is happy to report the facts in the New York mid-town food cart war.

And what it boils down to is some people play dirty. And sometimes they play dirty simply because that’s who they are, not what they are.

Let’s start at the beginning.

Yisroel Mordowitz owns the kosher meat food cart, “Holy Rollers Kosher Cart.” He used to be located in the Queens borough of New York City. A food cart vendor friend of his left a location in Midtown which Mordowitz knew would be spectacular for his cart. After six months during which the “prime” Midtown spot remained vacant, Mordowitz rolled his cart near Rockefeller Center in Manhattan, at 48th Street and 6th Avenue. That happened about ten days ago.

And that’s when the turf battle began.

Mordowitz and his Holy Rollers cart became the object of intense intimidation. Those menacing him were Egyptian Halal food cart owners. Halal is the standard of food preparation required of observant Muslims. Although observant Muslims can eat Kosher food, observant Jews are not able to eat Halal, as the Kashrut requirements are stricter and more extensive.

The competition would show up before Mordowitz arrived, and blockade the curb where he had set up his cart the day before. Then his competitors blocked the space with umbrellas and beverage cartons, just to ensure that the Holy Rollers cart could not serve customers there.  The Halal cart owners complained Mordowitz was interfering with their business, even though those who flocked to the Holy Rollers could not eat Halal-certified meat.

There are many Halal vendors in New York City, but, according to Mordowitz, Holy Rollers Kosher Cart is the only glatt Kosher meat food cart in all of New York City.

There is no “right,” under New York City law, for vendors to “own” certain locations, so the vendors blocking Mordowitz had no legal position. But they were intimidating.