Importantly, the journalist for SVR later apologized for asking the question as to whether ”Jews are to blame for rising tide of antisemitism?”.

This is the mindset of one too many journalists unfortunately, this is how they view the Jewish state, that they themselves are to blame for Muslims hating and trying to murder them, though Jews were not involved in any way in crafting their (Islam’s) religious texts, as well as a right to self determination in the land of Israel.

Condemning the Jewish state’s right to self-defence against fanatical genocidal Muslims, is a right of passage for these journalists, it never factors into their thinking that, in comparison to post-Christian Europe’s activities in NATO, the Jewish military has behaved in a far more moderate way then it ever has. NOTE: I’m reminded of the unethical interview by Norway’s NRK

(state news broadcaster) Sidel Wold, of Dr.Manfred Gerstenfeld in 2010, almost 5 years ago. She has still yet to apologize to Gerstenfeld. Scandinavian journalists are well known for their classic, narcissistic sanctimony.

Israel’s Ambassador turned an offensive question blaming Jews for rising anti-Semitism into terms the radio host could understand: would you blame a woman for being raped?
By: Lori Lowenthal Marcus
Published: February 18th, 2015 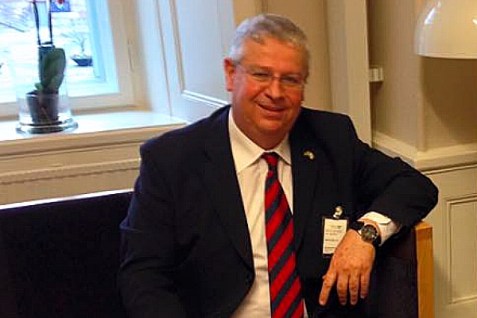 Israel’s Ambassador to Sweden, Isaac Bachman, said that he was very happy to receive a request for an interview from Swedish public radio Sveriges. The interview to discuss anti-Semitism in Europe took place on Tuesday, Feb. 17. The interview threatened to cause a national furor until this diplomat deftly turned a rotten lemon into delicious lemonade.

“It is not very common for the media to ask official representatives of Israel, people who can actually speak on behalf of the state,” Ambassador Bachman told The Jewish Press during a phone interview Wednesday evening, Feb. 18.

“I went to the studio, knowing that the topics we would be discussing included the recent terrorist attacks in which Jews were targeted and killed in Paris and Copenhagen, as well as Prime Minister Netanyahu’s call for Jews to make Aliyah,” he said.

Helena Groll, the Swedish journalist, started the interview by asking Bachman what he thought about Netanyahu’s call for Jews to leave Europe.

“I explained that Aliyah was not part of my work here, neither before such tragedies as took place in Paris and Copenhagen, or after. My job is not to convince the Jewish population to move to Israel,” Bachman told The Jewish Press, “I said people know that Aliyah is an option that is valid, one that exists and is open to them at any time.”

The next question from Groll was far more problematic.

The Swedish journalist asked the Israeli Ambassador: “Do the Jews themselves have any responsibility in the growing anti-Semitism that we see now?”

“My response?” Bachman said, “I told her ‘I reject this question completely.’”

“But she did not grab this chance to move on,” Bachman said. “She failed to grab this opportunity to retreat.”

Indeed, Groll kept shooting, “why?” when Bachman responded that “there is no place for such a question to be asked.”

As Groll began talking over Bachman, asking him to “tell me then, explore with me why is that a question of…” Bachman finally silenced her, by putting the situation in terms that she would be better able to understand.

He said, his voice becoming firmer and louder until Groll finally stopped talking: “To ask the question of whether a woman contributes to being raped is irrelevant altogether. I don’t think there is a provocation that the Jews are doing. They just exist.”