Duke Reconsiders: No Minaret on Cathedral, No Call to Prayer Broadcast

In an aboutface, Duke University will not place a minaret on its famed cathedral or broadcast the Muslim call to prayer.
By: Lori Lowenthal Marcus
Published: January 16th, 2015 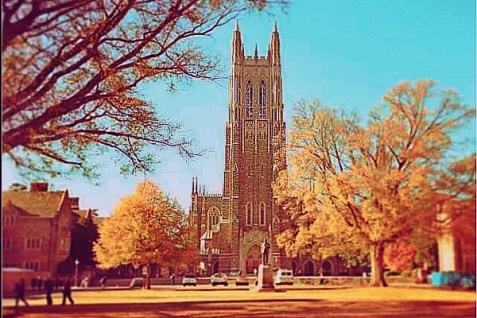 Duke University, located in Durham, North Carolina, announced recently that it planned to transform the bell tower on the school’s iconic cathedral into a minaret where the Muslim call to prayer would be publicly broadcast.

But a huge backlash against this Methodist-founded school’s decision led the university to abandon its plans.

“Duke remains committed to fostering an inclusive, tolerant and welcoming campus for all of its students,” university spokesman Michael Schoenfeld said in a statement issued on Thursday, Jan, 15. “However, it was clear that what was conceived as an effort to unify was not having the intended effect.”

The first call to prayer from the tower had been scheduled for Jan. 16.

The original plan to have the Islamic chant – which includes the words “Allahu Akbar” – made from the bell tower would have been “moderately amplified” in both English and Arabic.

Instead, the call to prayer will be moved to outside the chapel.  According to Thursday’s statement, Duke’s Muslims will now gather on the quadrangle outside the Chapel.

Schoenfeld pointed out that “more than 700 of Duke’s 15,000 undergraduate and graduate students identify as Muslim.”