What a steaming pile of poo on a frozen Finnish street. The glorification of violent practices has increased, but Muslims do not believe that Finland will witness violent attacks.

Muslims praying in the rock in the Islamic center. The persons who are not related to the story. (ANTTI NIKKANEN) 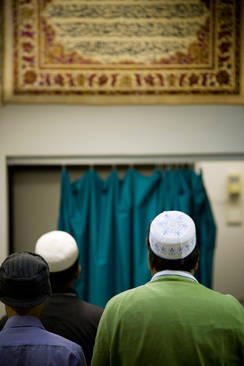 The terrorist attacks in Paris, were taken with a heavy heart by the Muslim community in Helsinki.

According to spokesman Hamza Peltola, Muslims are taking it hard that the entire community is called into question because of the attacks. The brothers who are suspects in the Paris attacks are radical Islamists.

– We of course react negatively to these attacks and what took place was really tragic. Every Muslim is responsible for their own doings we do not accept their deeds. But it is tough, that the community is questioned because of these acts. In a way I understand it, because it is generally felt that we are of the same community.

–  There was a larger political agenda behind the attack. The terrorist attacks may actually be staged, and their purpose was to smear and get the legitimacy for counter measures. For example, the WTC attacks have been launched under the banner of the entire war on terror against Muslims. At the same time, thousands of innocent bystanders suffer and die, and no one talks about the victims .

The attacks that took place in Paris  was against the satire of Charlie Hebdo magazine. The magazine is ridiculed in its  illustrations, inter alia, extremism and published pictures of the prophet Mohammed. 12 people died in the attack, four of whom were newspaper cartoonists.

Helsinki Muslim community condemns the violence, but the spokesman considers that the issue of freedom of speech should be addressed.

– When we live in civilized country, and we know what may cause some faith communities to react, so why do they want to intentionally cause it in the name of freedom of expression? Who will benefit from the fact that another’s religion is ridiculed? It is playing with fire, Peltola says.

– Prophet Muhammad is a sensitive issue for Muslims. It is, of course, absurd and wrong, that because of him innocent people are killed, but verbally we condemn the fact that he made fun of.

NOTE: After reading this IL puff piece interview of an Islamic agitprop spewer, just bear in mind that more and more people are getting pissed off from a continual array of pukes like this, who insult publicly our intelligence as they overtly aim to strip us from our hard won rights. I won’t parse this idiots nonsense, my regular readers are able to do it by themselves.