It’s like as if the Allied Power (western states) prior to WWII had imported tens of millions of national socialist minded Germans into their societies, then had to curtail themselves on what could be said about Adolf Hitler, his henchmen and The Third Reich.

“Paris was just the beginning of the apocalypse in Europe” was exclaimed on the Twitter feed of the Hamburger Morgenpost which was firebombed last night.
By: Lori Lowenthal Marcus
Published: January 11th, 2015 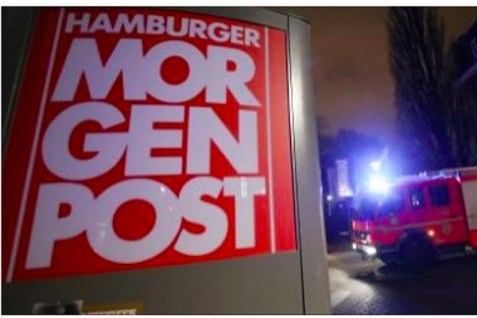 A German newspaper was firebombed overnight after it printed cartoons from the Charlie Hebdo magazine.

Several newspapers have been reprinting cartoons originally published by the French satire magazine in a gesture of solidarity after the brutal terrorist attack last week in which 12 people were executed by Islamist terrorists.

Charlie Hebdo‘s cartoonists were targeted specifically for publishing cartoons which depicted Islam’s prophet Muhammed. Radical Islamists deem such portrayals to be so heretical that people deserve to die for merely drawing and or publishing such cartoons.