For the full and part time anti-Semite, it’s always the Jews to blame. 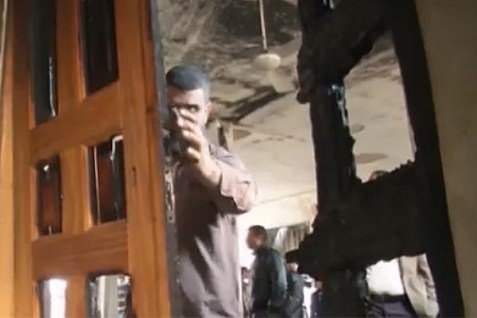 Damage from an electrical fire in a mosque in the town of Mughayer, near Ramallah, on Nov. 12, 2014.
Photo Credit: YouTube

A mosque in the disputed territories town of Mughayer near Ramallah suffered severe fire damage back in November. The word out immediately was that Jews were responsible. Not just any Jews, of course, but those evil extremist “settlers.”

The mayor of Mughayer, Faraj al-Nassan, told the Associated Press that the Jews were to blame for the fire.

“Only Jewish settlers would do this,” he said.

He neglected to mention any other possibility, including the actual one, the electrical malfunction of a space heater.

Nassan made the statement to the AP, which dutifully reported it, and then the unverified rumor ossified firmly into fact, showing up in dozens of media sources throughout the world.

Yahoo! News posted an AP photograph of an Arab man holding a heavily burned Quran, describing the fire as having resulted from “an attack” against the mosque which “ignited a fire that destroyed its first floor.” The Yahoo! caption included the village’s mayor “blaming Jewish settlers for the attack.”