ALGIERS (Reuters) – Algerian security forces have killed a second militant involved in the kidnapping and beheading of a French tourist in September, the Algerian justice minister said on Thursday.

Militants claiming loyalty to Islamic State militants fighting in Iraq and Syria killed Herve Gourdel in the mountains east of Algiers, where the Frenchman had been planning a trekking trip before he was kidnapped in September.

By Hamid Shalizi3 minutes ago

KABUL (Reuters) – A suicide bomber attacked a French-run high school in Afghanistan’s capital on Thursday, killing at least one person hours after another bomb left six Afghan soldiers dead on the outskirts of Kabul, officials said.

The Afghan capital has been hit by a series of bombings and armed attacks this year as most foreign combat troops prepare to withdraw at the end of the month.

Deputy Interior Minister General Ayoub Salangi said the suspected school bomber was about 17 years old and detonated his explosive vest inside the venue, killing at least one person and wounding 16 others during an event at the school.

‘Stronger than ever’ jihadists kill 5,042 in a month London (AFP) – Jihadist attacks around the world in November killed a total of 5,042 people, showing Islamist extremism is “stronger than ever” despite Al-Qaeda’s declining role, a new study published on Thursday said.

There were 664 attacks in 14 countries during the month, according to the joint report by the BBC World Service and the International Centre for the Study of Radicalisation (ICSR) at King’s College London. 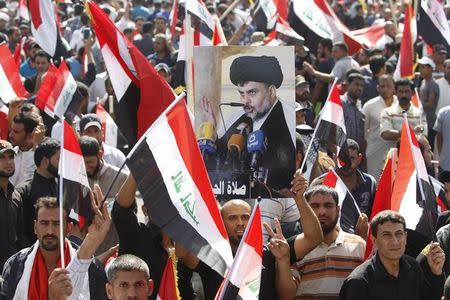 BAGHDAD (Reuters) – Iraq’s powerful Shi’ite cleric Moqtada al-Sadr has put his militia on alert to battle Islamic State militants for the city of Samarra, home to a Shi’ite mosque whose destruction eight years ago plunged the country into sectarian war.

Sadr’s office said the announcement was a response to the “exceptional conditions and imminent danger to the sacred city of Samarra from the legions of terrorists,” a reference to the Sunni Muslim Islamic State fighters who surround Samarra.

It said Sadr had ordered fighters of his Shi’ite ‘Peace Brigades’ to be “fully prepared to answer the call of jihad within 48 hours” and to await further instructions. The statement was dated Dec. 10.

Central Samarra is in the hands of the Iraqi army and several Shi’ite militia who have spearheaded the Shi’ite-led government’s battle against Islamic State, which controls of much of north and west Iraq as well as swathes of Syria.

Sadr’s Peace Brigades left the city two months ago, but his latest statement suggested they could mobilize to return if Islamic State fighters stationed at the approaches to the Tigris River city start to encroach on the urban center itself. 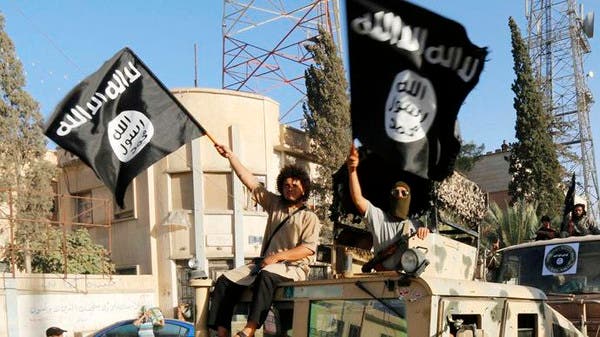 DUBAI (Reuters) – Saudi Arabian security forces have arrested three Saudis over the Nov. 22 shooting of a Danish man in Riyadh and investigations show the attack was carried out in support of the Islamic State militant group, the state news agency said.

“Initial investigations showed that the perpetrators carried out their crime in support of the terrorist Islamic State, they were trained two weeks before perpetrating the crime,” the spokesman said.

A group of supporters of Islamic State later released a video said to show its members carrying out the shooting, which the victim survived. 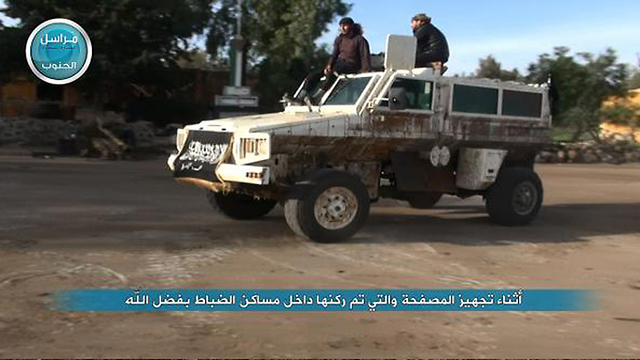 The Al-Nusra Front using the UN vehicle for the attack. (Photo: Twitter)

Syrian opposition sources say al-Qaeda-linked Syrian rebels, known as the Al-Nusra Front, have taken over areas along the Israeli-Syrian border and have recently been spotted using UN cars to conduct terror operations.

According to the sources, the Al-Nusra Front has seized large swaths of the southern Golan Heights and has used UN cars during attacks against Assad’s army near the city of Daraa in southwestern Syria – a worrying sign of the capabilities of the Syrian al-Qaeda branch. 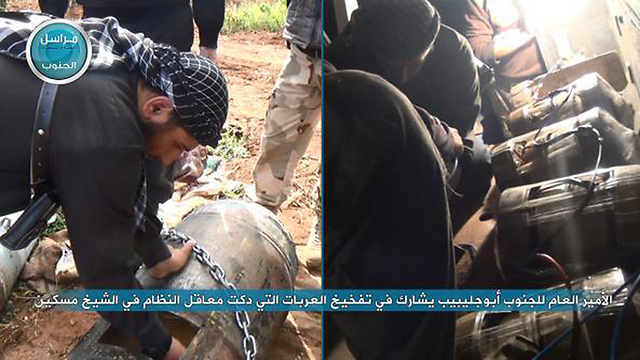 The Al-Nusra front preparing the explosives before the attack. (Photo: Twitter)

The Syrian opposition sources claimed the use of the UN vehicles was part of a double car explosion attack. The terrorist behind the attack, Abu Khattab al-Muhajir, was able to exit the vehicle before it exploded.

The UN car was the second of the two vehicles to explode and led to the deaths of two of Assad’s men who were not killed from the first explosion.