And please, throw away the key.

Protesting something that they haven’t a clue about, or worse, knowing the facts they choose to lie and smear these officers an foment unrest, is a regular event for liberal maroons. 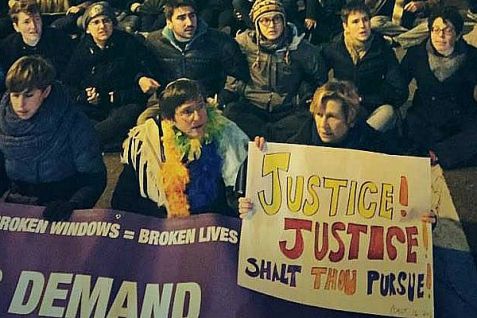 The American liberal Jewish guilty conscience always plays itself out to identify with those who are not Jewish.

Several prominent and liberal Jewish leaders and the president of a national teachers union were among nearly 100 people arrested Thursday night while protesting police brutality.

Sharon Kleinbaum, Jill Jacobs, and Shai Held, who hold the title “rabbi” that is not recognized by Orthodox Judaism, along with Randi Weingarten, the president of the American Federation of Teachers, were taken into custody for blocking traffic to protest a grand jury’s decision not to indict the New York police officer who choked Staten Island resident Eric Garner to death.

They also recited the “Kaddish” prayer for mourners in memory of Garner,

The protests, held on Manhattan’s Upper West Side, were organized by the organization Jews for Racial and Economic Justice.

Kleinbaum is the longtime spiritual leader at Congregation Beit Simchat Torah, the country’s largest LGBT synagogue, and is also Weingarten’s partner. Directly before the protest, she was honored by JFREF with a Marshall T. Meyer Risk Taker Award at nearby Congregation B’nai Jeshurun.

Attendees at the ceremony read the names of more than 20 black males who had been killed by New York police, followed by the phrase, “I am responsible.” They then marched to the nearby intersection at 96th and Broadway — blocking traffic and holding protest signs.