For the AP however, I award : The AP, in a series of email exchanges with the Jewish Press journalist, is shown to be run by obfuscating fools who believe (arrogantly) that their word is bond, even when shown (repeatedly) to be otherwise. In fact, the more they dissemble, the more it’s clear that they (The AP gatekeepers) have in fact put a cordone sanitaire around NGO Monitor and it’s president, Gerald Steinberg.

NOTE: Kudos to Lori for plugging away at them and the story, I can’t wait to read more about them.

”The Jewish Press asked Lavie whether he knew if there was an AP ban on quoting Prof. Gerald Steinberg around the time of Operation Cast Lead.

Lavie said he did.

He said he knew there was such a ban because, when he put a quote from Steinberg in one of his articles sometime in 2009, the AP Jerusalem bureau chief made him remove it. That editor then told him that AP reporters “can’t interview Steinberg as an expert because he is identified with the right wing.”

Subsequently it was made clear that NGO Monitor’s reports were not to be quoted, either, because it was pro-Israel or anti-Palestinian or right-wing, however it was put.

A second AP reporter came forward, explaining he was told, point blank, ‘AP reporters can’t interview Steinberg as an expert because he is identified with the right wing.” Same with Steinberg’s outfit, NGO-Monitor. 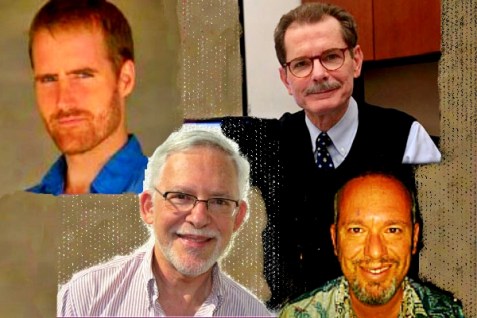 It began with a “tell-something” tale by a former reporter. But as with so many small tempests, the shrill response of the alleged victim has fanned the winds to tornado strength.

A former AP reporter, Matti Friedman, publicly detailed allegations of biased coverage of the Israel-Arab conflict and claimed that Gerald Steinberg, a non anti-Israel expert, was banned by the AP. Friedman was immediately and with great force contradicted by Paul Colford, AP’s director of media relations.

Colford claimed Friedman’s articles were filled with “distortions, half-truths and inaccuracies.” And he wrote, point blank, there was “no ban on AP’s use of Prof. Gerald Steinberg.”

So, it’s “he said – he said,” right? But as it turns out, we have a tie-breaker. A second former AP reporter explicitly confirmed to The Jewish Press that, despite Colford’s denial, there was indeed a ban in place in AP’s Jerusalem bureau on quoting Steinberg, and that he could state this with confidence. How? Because that ban was explained to him by the AP’s then Jerusalem bureau chief.

The original stories were written by a former Associated Press reporter, Matti Friedman. The first was in the online Tablet magazine, followed by another in The Atlantic.

Friedman provided substantial detail on what close followers of Middle East reporting already understand: the mainstream media has bought the Palestinian Arab story line about the Arab-Israeli conflict: the Palestinian Arabs are the Davids, the Israelis are the Goliath.

While this story is often hard to square with the facts, that only matters when the truth matters. And as Professor Richard Landes eloquently puts it: “you pay a high price for telling the truth about the Palestinian Arabs and no price for telling lies about Israel.”

Friedman’s pieces in the Tablet and The Atlantic offered numerous examples of what he described as AP staff looking the other way when Arabs violated laws of war or when Israel made peace offerings, including submitting to intimidation by Hamas.

In our last pass at this story, readers will recall that The Jewish Press zeroed in on a startling new fact Friedman had in his Atlantic article: that the AP had “banned” interviews with Bar Ilan Professor Gerald Steinberg and the use of materials by the non-governmental organization watchdog which Steinberg founded and heads, NGO-Monitor.

Friedman made this claim on the basis of his experience as a new reporter in AP’s Jerusalem bureau during Operation Cast Lead (December 2008 to January 2009) between Israel and Hamas-controlled Gaza.

In particular, Friedman was struck by the pedestal upon which self-proclaimed human rights organizations were placed by AP, and their claims, particularly condemnations of Israel, accepted without reservation. It was in this context that Friedman learned about the ban on Steinberg.

Friedman stated, without any qualifications, that in a region “with its myriad lunatics, bigots, and killers, the only person I ever saw subjected to an interview ban was this professor.”