No word yet on the criminal who stabbed him. 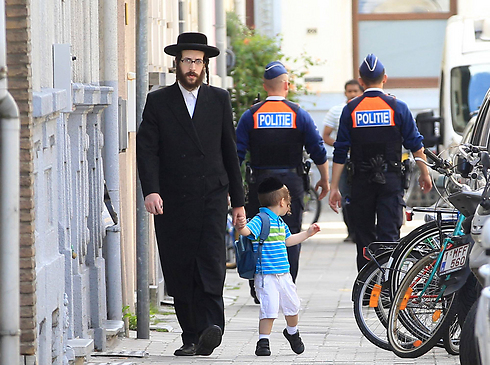 Local media reporting that a local rabbi was stabbed while he was walking to his synagogue; man is said to be in serious condition.

Local media are reporting that a 31-year-old Haredi man was stabbed Saturday morning while he was walking to his synagogue in Belgium. The man is said to be in serious but stable condition.

Ynet has confirmed that a member of the Antwerp Jewish community was stabbed Saturday morning, it is also possible he is being referred to as a rabbi because he is Haredi. Belgian police arrested a suspect but then released him; it is unclear if the motive was anti-Semitic or criminal.

According to European Jewish Congress, “(Saturday) morning, a chasidic man got stabbed in his throat in Antwerp, Belgium.

“Attacker ran towards two chasidim who were on their way to the synagogue, stabbed one of them in the throat and got away. (The) injured man was taken to the hospital and his life is not threatened. Police are currently investigating the case, local security team is controlling the situation and protecting the neighborhood.”

According to a local report, at around 9:20 the man was waling under the railway bridge in Antwerp’s Pelikaanstraat when a passerby suddenly stabbed him in the neck with a sharp object in the neck. The perpetrator has disappeared, but the police will investigate the matter.

Initial reports say the man was a rabbi walking to a local synagogue, and according to the reports he is in serious condition, though no threat is posed to his life.

A Chasidic man was stabbed in his throat in Antwerp, #Belgium. The attacker escaped and police is searching for him. Stay vigilant for now.