Besmirching Christians/Christianity in front of their faces, while showing their rear ends to them as well.

Extolling his National Cathedral Christian hosts, the good ambassador Rasool quoted (video here; hat tip Tundra Tabloids)—in deliberately truncated fashion—only the latter portion of Koran 5:82 (equivalent to this: “…and you will find the nearest in love to the believers (Muslims) those who say: ‘We are Christians.’ That is because amongst them are priests and monks, and they are not proud.”) What Mr. Rasool omitted is the virulently Jew- and “pagan”-hating, opening half of verse 5:82: “Verily, you will find the strongest among men in enmity to the believers (Muslims) the Jews and those who are Al-Mushrikun (i.e., “idolatrous” Hindus, Buddhists, and Animists).” 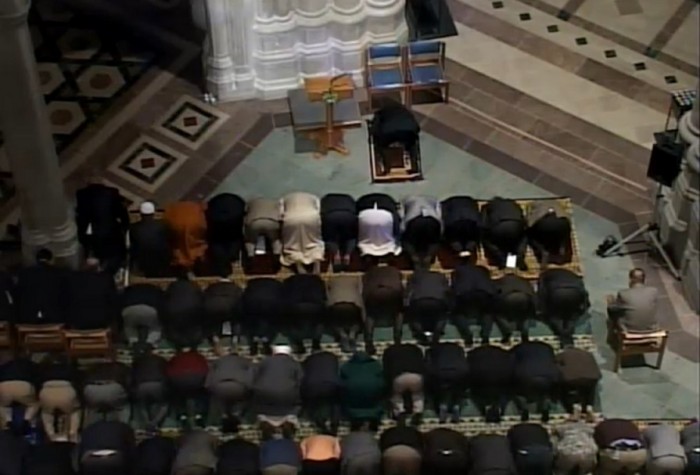 This past Thursday (11/3/14) in anticipation of a midday Friday Islamic service, to be held, November 14th in the National Cathedral I noted the willful obliviousness to a grim centennial remembrance: November 11, 1914, when the Ottoman Sheikh ul-Islam (supreme Muslim religious authority) issued fatwas (religious edicts) declaring a jihad against non-Muslim state enemies of the last Muslim “Caliphate.”

Subsequent Ottoman Muslim fatwas (see here; here) promulgated during the World War I era would target Christian minorities, under Sharia-based Ottoman Muslim rule, for genocidal jihadism against these hapless non-Muslim victims. The Ottoman jihad ravages were as barbaric and depraved as the recent horrific spate of ISIS atrocities in Iraq and Syria, and far more extensive. Occurring, largely between 1915-16 (continuing through at least 1918), some one million Armenian, and 250,000 Assyro-Chaldean and Syrian Orthodox Christians were brutally slaughtered, or starved to death during forced deportations orchestrated by their Ottoman Muslim rulers, through arid wastelands.

Following the Friday November 14th event (which can be viewed in its entirety, here; or here; see also this useful written summary account), Dean of the National Cathedral, Gary Hall, when questioned about this cruelly ironic timing, conceded, “I did not know that it was that anniversary”—but then segued into an unconscionable immoral equivalence defending the “ecumenical” Muslim prayer service.

The Jew-hating nature of this verse—well-established by classical Koranic commentaries, spanning over a millennium—was re-affirmed by Sunni Islam’s most prestigious center of religious education, Al-Azhar University, and its current leading cleric, Grand Imam, Ahmed al-Tayeb. During an interview with Al-Tayeb, which aired on Channel 1, Egyptian TV, October 25, 2013, Al-Azhar’s Grand Imam gave a brief explanation of the ongoing relevance of verse 5:82which has been invoked—“successfully”—to inspire Muslim hatred of Jews since the advent of Islam:

A verse in the Koran explains the Muslims’ relations with the Jews…This is an historical perspective, which has not changed to this day. See how we suffer today from global Zionism and Judaism…Since the inception of Islam 1,400 years ago, we have been suffering from Jewish and Zionist interference in Muslim affairs. This is a cause of great distress for the Muslims. The Koran said it and history has proven it: “You shall find the strongest among men in enmity to the believers to be the Jews…”