The same jihad being waged against the West has been raging against the Jews since time immemorial. 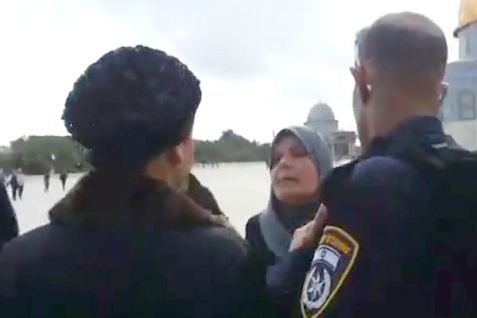 MK Shuli Moalem-Rafaeli was physically accosted during a visit to the Temple Mount on Nov. 3, 2014.

MK Shuli Moalem-Refaeli (Bayit Yehudi) filed a complaint with police on Monday morning. In her complaint, Moalem reported that she was attacked by a woman on the Temple Mount.

Following her complaint to the police, she went to the Officer of the Knesset.

The police spokesperson reports that MK Moalem was on the Temple Mount with a group of visitors when she was approached by a Muslim woman who began to yell at her and then physically shoved the Israeli Member of Knesset.

The Muslim woman was arrested and brought in for questioning.

MK Moalem was not injured in the incident, and continued with her tour of the Jewish holy site.

Police add they will show zero tolerance for any violence towards visitors on the Temple Mount, and anyone acting with violence will be arrested.