The Palestinian Authority is recognized by Sweden as a sovereign country, even without borders and steeped in debt. Why not Ladonia?
By: Hana Levi Julian
Published: November 2nd, 2014 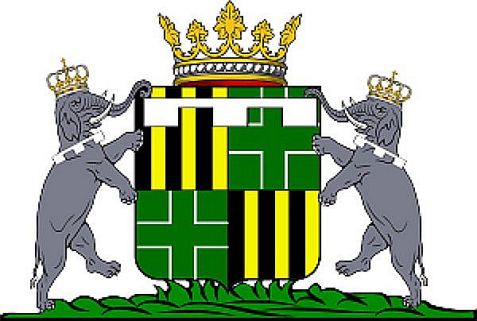 The coat of arms of Her Royal Highness, Crown Princess Greta of Ladonia.
Photo Credit: courtesy, Republic of Ladonia

The Palestinian Authority has been granted non-member state status at the United Nations and just last week was recognized as an independent sovereign country by Sweden’s new prime minister.

So why not the tiny nation of Ladonia? <– Click Here

Ladonia – a square kilometer that surrounds a set of sculptures – declared its independence from Sweden in 1996.

Although Sweden has not recognized the independence of Ladonia, the constitutional monarchy is currently ruled by Queen Carolyn I and President Christopher Matheoss.

Dr. Lars Vilks, the cartoonist of “Mohammed characterizations” fame – is the State Secretary.

Ladonia already has well-defined boundaries, as well as a government and a quite civilized society that includes a monarchy, a president, nobility and common citizens within its one square kilometer land mass.

The nascent micro nation has a national newspaper and its own holidays, and has ambassadors to nations around the world.

Happily, in response to a recent article about Sweden’s recognition of the Palestinian Authority as a sovereign country, the Queen of Ladonia said that Ladonia would welcome ties with Israel.

“Ladonia would welcome the opportunity to open formal diplomatic relations with Israel,” the Queen replied. “Just have the Minister of Foreign Affairs drop us a note at info@ladonia.org.