Wikipedia: The Hebron massacre refers to the killing of sixty-seven Jews (including 23 college students) on 24 August 1929 in Hebron, then part of Mandatory Palestine, by Arabs incited to violence by false rumors that Jews were massacring Arabs in Jerusalem and seizing control of Muslim holy places.[1] The event also left scores seriously wounded or maimed. Jewish homes were pillaged and synagogues were ransacked. Many of the 435 Jews who survived were hidden by local Arab families.[2][3] Soon after, all Hebron’s Jews were evacuated by the British authorities. Many returned in 1931, but almost all were evacuated at the outbreak of the 1936–39 Arab revolt in Palestine. The massacre formed part of the 1929 Palestine riots, in which a total of 133 Jews and 110 Arabs were killed, and brought the centuries-old Jewish presence in Hebron to an end.

The instigator of these Arab riots/pogroms against the Jews, was none other than Hajj Amin al-Husseini, the mufti of Jerusalem. One of the Youngest Survivors of Hebron Massacre Dies at 86

The 18-month-old survived the Hebron massacre because he was covered by the corpses of his parents.
By: Lori Lowenthal Marcus
Published: October 27th, 2014
Latest update: October 28th, 2014 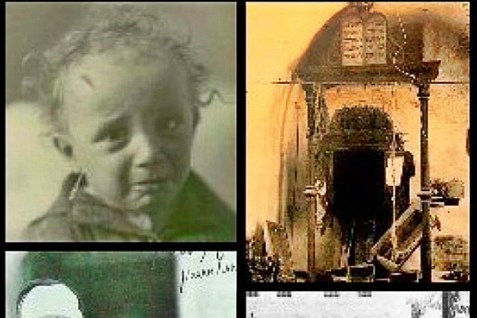 In 1929, after years of relatively peaceful existence, the Arabs of Hebron responded to the call of the Mufti of Jerusalem and slaughtered the Jews in their midst.

A Jewish child, Shlomo Slonim, 18-months-old at the time of the massacre, survived the brutality.

The Slonim baby lived because after being struck in the head with an axe, he lost consciousness and was covered by the dead bodies of his slain parents. His four-year old brother and grandparents were also slaughtered.

In all, 24 of the 67 Jews butchered in Hebron that day died in the Slonim house. People hid there because it was thought to be the safest place, given the close relations Shlomo’s father had with the Arab neighbors who had promised him protection.

But none were spared.