They say Chaya was murdered for no reason, but I say she was in fact murdered for a reason, with the clear intention to instil fear into the hearts of every Israeli, and done with the stamp of Islamic approval.

NOTE: The current batch of numskulls at the US state dept. has the nerve to urge ”restraint” on the Israelis against the individual (and abettors) who was released by the government due to pressure from the US. Talk about chutzpah!

watch the car drive into the crowd of Israelis. Arabs are complaining that Israel has put up additional checkpoints in the wake of this attack which injured 8 and killed a 3 month old baby. 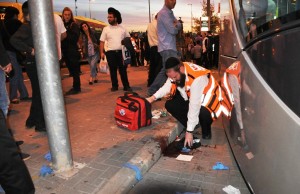 Chaya had been born after her parents had tried for years to have a baby to no avail, said Halperin, adding that her parents were in shock, having just learned of her death.

He linked the killing to “the Arabs’ merciless hatred of thousands of years,” saying that they killed “a pure girl with a holy soul, who never did anything bad to anyone in her life and was murdered for no reason.”

Baby girl killed in Jerusalem is an American, US official says

WASHINGTON — Three-month-old Chaya Zissel Braun, the baby girl killed today in Jerusalem during a vehicular terrorist attack, was an American citizen, a US official confirmed to The Jerusalem Post on Wednesday night.

The girl was thrown from her stroller as a car swerved into the Ammunition Hill light rail station, injuring seven others.

State Department deputy spokeswoman Marie Harf has “urged restraint” and calm from both sides after the attack.

A few hours ago in Jerusalem a terrorist launched an attack in which he drove his car into a crowd of people waiting for a light rail train. Early reports are still coming in, but – of course – the stream is still a bit muddy. It’s close to certain  that at least 8 people were injured in the attack, among them a critically injured baby. There have been multiple credible reports that the baby died after being taken to the hospital. The terrorist was also initially reported as dead – he was shot fleeing the scene – but subsequent reports have him still alive.

These details will firm up as the Israelis release more information. In the meantime I wanted to put some things on your radar to watch. Depending on what we learn, one or more of these angles may become very relevant very quickly:

(1) Was Hamas responsible? Steve Linde – veteran Israeli journalist, now editor-in-chief of The Jerusalem Post – tweeted that Hamas has claimed responsibility for the attack.

If the claim is confirmed it will have effects both in the Gaza Strip and in the West Bank. In the Gaza Strip, the international effort to rebuild the territory will now be called upon to take additional steps to ensure that Hamas is defanged before more materials flow in. Giving Hamas aid in one place while their terrorists are killing babies 100 miles away is going to be problematic. In the West Bank, Palestinian Authority (PA) and Israeli security officials are going to have to figure out what infrastructure if any supported the terrorist, who himself may have come either from the West Bank or from Jerusalem.

How he was freed will determine how this angle plays out. If he was freed in a prisoner exchange, perhaps the Shalit deal, then the attack will hamper any future such deals. If he was freed as a good will gesture, perhaps at US behest during the latest talks, then the attack may have diplomatic impacts. During the summer war there was a dustup when the Israelis took an internationally-urged risk that was militarily unsound – this was one of the specific ceasefires – and the result was a snatched soldier. It’s getting progressively more difficult to convince them that the international community knows best in these regards, and a terrorist attack by a freed prisoner would further complicate that dynamics.

It seems as if he was referring to the critically injured baby and the two parents. If the report is confirmed then it puts an exclamation point on the other dynamics: how can the US run point on rebuilding the Hamas-controlled Gaza Strip while Hamas is killing Americans, how can the US be urging the Israelis to release prisoners when those prisoners are killing Americans, etc. Past administrations have also taken steps, independent of whatever the Israelis are going to do, in response to terror attacks on Americans. Expect to see the White House and Foggy Bottom to call on Palestinian and Arab leaders to condemn the attack, demand steps to bring the perpetrators to justice, etc.