Major rift in the tali-tard rank and file. 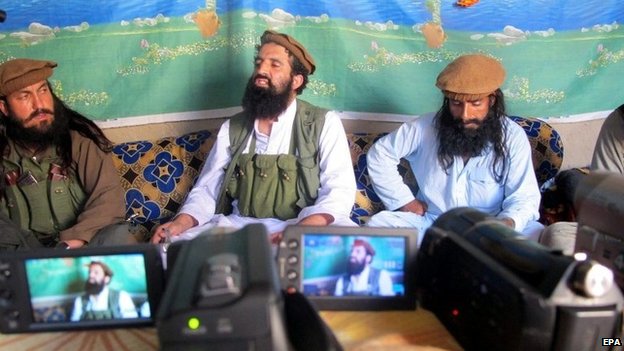 Shahidullah Shahid (centre) had been the TTP’s main media contact

Pakistan Taliban spokesman Shahidullah Shahid has been sacked after pledging allegiance to Islamic State (IS).

The militants said he had been replaced but did not name his successor. A statement reiterated support for Afghan Taliban leader Mullah Omar.

It emerged last week that Shahidullah Shahid and five other Pakistan Taliban (TTP) commanders had defected to IS which controls parts of Iraq and Syria.

Analysts say IS poses a challenge to Taliban, al-Qaeda and other militants.

The TTP statement said Shahidullah Shahid was a nom de guerre and its former spokesman’s real name was Sheikh Maqbool.

BBC Urdu’s Haroon Rashid in Islamabad says these are further signs of splits within the Pakistani Taliban, which is already divided.

Last week, a senior TTP leader confirmed to our correspondent that Shahidullah Shahid and the five other senior figures had left because they had doubts about the leadership of Mullah Mohammad Omar.