Women from Finland have travelled to the Syrian conflict area more than in Europe on average.

Women extremely rarely  end up engaged in combat jihadist groups, but they are involved in attracting people to join the ranks of the jihadis. 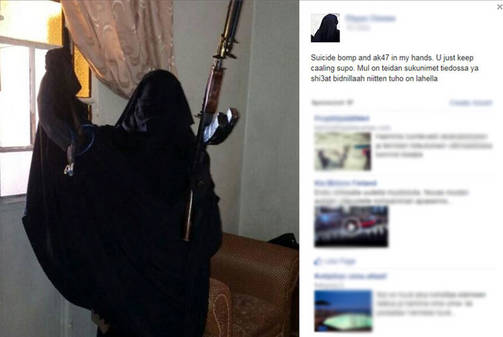 Aisha who left for Syria published in June on her Facebook wall includes a picture, posing as a female jihadisti with a bomb and an assault rifle. The text promises the death to the Shiite Muslims.

On Saturday, there appeared in the monthly supplement of Helsingin Sanomat which told the Espoo-Aishasta, who travelled with her husband Hussein to Syria, where they are involved in Islamist Isis organization’s activities.

According to the Monthly Supplement Aisha was changed from being an ordinary immigrant high school girl to one with strong religious convictions. She went contrary to the will of their parents to get married, also with Islamist Hussein.

Aisha rose to the public eye in Finland in June, when she updated her Facebook Page with an image, of a burka wearing woman posing with AK-47 assault rifle in hand and the threat of Shia Muslims with destruction.

According to the Security Police in Finland there are known to have left more than 45 people to Syria, of which one-fifth are women. It means seven to nine women.

National Defence University researcher Juha Saarinen, in relation to higher than elsewhere in Europe, where women have an average of being 10 to 15 per cent of those leaving the country.

Saarinen says that of the women that have left for Syria, little is known about their motives.

– Probably the most of those who have left are married to their husbands, and have gone with them to the areas of conflict. Of these women who have left, all have been supporters of Isis.

– The majority of the women who have left are attached to a person who has been in the area or travelled to the area, Security Police Communications Chief Jyri Rantala states.

– Some are house wives who keep the house afloat. Especially if their family has young children. If the children do not exist, women may take another social role and activities such as teachers. Some are known to patrol the streets and to supervise the local women to dress in accordance with the requirements of the Islamic state, Saarinen says.