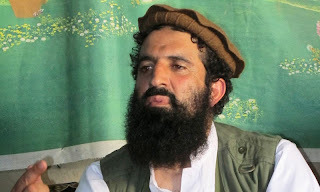 Pakistani Taliban Spokesman Shahidullah Shahid Reuters – The Pakistani Taliban declared allegiance to Islamic State on Saturday and ordered militants across the region to help the Middle Eastern jihadist group in its campaign to set up a global Islamic caliphate.

Islamic State, which controls swathes of land in Syria and Iraq, has been making inroads into South Asia, which has traditionally been dominated by local Taliban insurgencies against both the Pakistan and Afghanistan governments.

The announcement comes after a September move by al Qaeda chief, Ayman al-Zawahri, to name former Taliban commander Asim Umar as the “emir” of a new South Asia branch of the network that masterminded the 2001 attacks on the United States.

Although there is little evidence of a firm alliance yet between IS and al Qaeda-linked Taliban commanders, IS activists have been spotted recently in the Pakistani city of Peshawar distributing pamphlets praising the group.

IS flags have also been seen at street rallies in Indian-administered Kashmir. The trend has been of growing concern to global powers struggling to keep up with the fast-changing nature of the international Islamist insurgency.