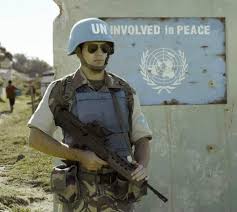 I’m not saying that the Iraqi government is as careful as the Israeli’s in targeting armed combatants, (they’re not, Israel stands heads and shoulders above all of its critics), but they (Iraqi military) are not even in the same league with the head choppers. So screw the UN, who care what they have to say.

Mass executions of up to 1,500 at a time, girls abducted as sex slaves and children used as soldiers: UN report confirms ISIS’s atrocities across Iraq

Islamic State militants have carried out mass executions, abducted girls as sex slaves and used child soldiers in what may amount to systematic war crimes in Iraq that demand prosecution, the UN said today.

It said ISIS fighters had committed gross human rights violations of an ‘increasing sectarian nature’ against groups including Christians, Yazidis and Shi’ite Muslims in a widening conflict that has forced 1.8 million Iraqis to flee their homes.

However, it also said Iraqi government air strikes on the Muslim militants had caused ‘significant civilian deaths’ by hitting villages, a school and hospitals in violation of international law.

UN High Commissioner for Human Rights Zeid Ra’ad al Hussein said: ‘The array of violations and abuses perpetrated by ISIL and associated armed groups is staggering, and many of their acts may amount to war crimes or crimes against humanity.’

It came as Turkey’s parliament was debating a motion to give the government new powers to launch military incursions into Syria and Iraq and to allow foreign forces to use its territory for possible operations against the Islamic State. Barbaric: A UN report has confirmed a series of atrocities committed by the Islamic State including this mass execution of around 1,500 Iraqi soldiers and security officers in the Salahuddin province of Iraq in June

In a statement, he called again for the Baghdad government to join the International Criminal Court, saying the Hague court was set up to prosecute such massive abuses and direct targeting of civilians on the basis of their religious or ethnic group.

The report said the ISIS atrocities ‘include attacks directly targeting civilians and civilian infrastructure, executions and other targeted killings of civilians, abductions, rape and other forms of sexual and physical violence perpetrated against women and children, forced recruitment of children, destruction or desecration of places of religious or cultural significance, wanton destruction and looting of property, and denial of fundamental freedoms.’