Violence from the chaotic hard-Left.

The morons fail to see the irony in using fascist tactics to rail against supposed ‘fascists’. I remember representatives of the Left in a televised debate on Finnish YLE TV, admitting that some violence against the state (mentioning only property) is justified.

The Finns district office was stoned in Helsinki on Thursday. Responsibility for the work was taken by the anarchist Takku.net site. 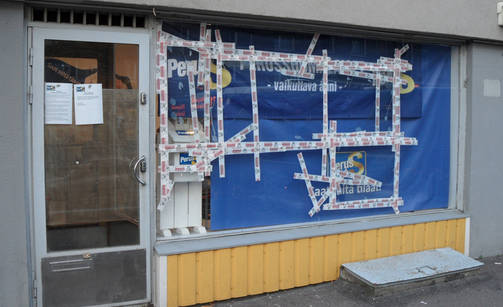 The party’s district office windows had large rocks thrown at it. Nuutti HYTTINEN

The Finns Party district office located on Hämeenlinna road, Helsinki, was stoned on Thursday. The Finns Youth Chairman Simon Elo told Iltalehti that no one was injured in the attack.

The office has been used in the past, among other things, for Finns MEP Sampo Terho as a campaign office.

– Big stones were thrown at the office and windows were broken. Also Terho personal items, such as television, were harmed, Elo says.

Anarchist Takku.net published on its site on Thursday afternoon a press release, which takes responsibility for the attack. The act was a stand against fascism.

The Finns have made a police report. Elo says that the party is taken it very seriously. He fears that violent political activism is now spreading now from Sweden to Finland.

– I am surprised that the anti-fascist criminals are able to act here in Finland.