With all those ground to surface missiles acquired from the FSA. 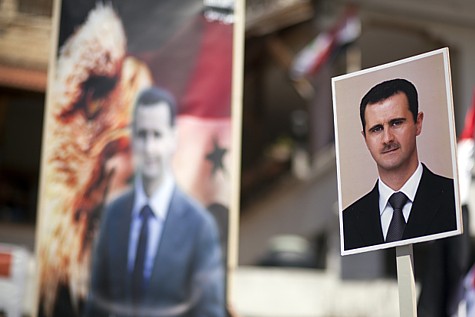 ISIS may have downed its first war plane when a Syrian fighter plane crashed in Raqqa, the ISIS headquarters in Syria.

Posters of Syrian president Bashar al-Assad. A Syrian war plane crashed while carrying out strikes against ISIS on Sept. 16, 2014.

ISIS shot down a Syrian regime’s warplane on Tuesday, Sept. 16, according to a report based on information from the UK-based Syrian Observatory for Human Rights monitoring group.

The Syrian plane was engaged in attacking the ISIS base in Raqqa when it was shot down. Raqqa, used as the headquarters by ISIS,  is a city in north central Syria, on the north bank of the Euphrates River, approximately 100 miles east of Aleppo.

After being shot down, the plane crashed into a house. Rami Abdul Rahman, the SOHR director, said there were casualties on the ground. Other reports claimed there were eight casualties following the crash.

“It is the first aircraft shot down since the regime launched air strikes against the jihadists in July following their declaration of a caliphate in late June,” according to an SOHR statement.