Three Media Workers Were Murdered Thursday in Their Quetta Office

KARACHI, Pakistan—Journalists in Pakistan’s strife-torn southern Baluchistan province held demonstrations Friday to protest the killing of three media workers, an incident that underscored the risks faced by media workers in the region.

Two journalists and a network employee were shot dead by armed assailants Thursday evening in their office in the provincial capital of Quetta, local security officials said. One of the victims was Irshad Mastoi, a prominent local journalist who was the bureau chief of the Online International News Network and secretary-general of the Baluchistan Union of Journalists.

The shooting was one of two suspected militant attacks Thursday in the province and comes amid broader political upheaval in Pakistan. A few hours after the journalists were murdered, gunmen opened fire in a mosque belonging to the minority Zikri Muslim sect in the Awaran district south of Quetta, killing six worshippers.

“We demand the arrest of the people who have murdered our brothers,” said Irfan Saeed, president of the Baluchistan Union of Journalists, after attending the funeral of Mr. Mastoi.

BEIRUT: The images of what appears to be the beheading of a Lebanese Army soldier, Ali Sayyed- one of eleven soldiers captured by ISIS militants was heavily circulated on social media Thursday evening.

The victim, Ali Sayyed, is an Army soldier originally from Akkar. He was among soldiers and Internal Security Forces personnel captured during clashes that pitted jihadists against the Lebanese Army in the border town of Arsal earlier this month.

Abou Misaab Hafid al-Baghdadi claimed that he was a member of ISIS in his Twitter bio.

A senior Army official said the military was investigating reports on the beheading of Ali Sayyed.

Two leaders of Yemen’s Popular Congress Party, which has ministers in the current government, were assassinated on Friday by unidentified militants in the southern Lahij province, a security source has said.

“Two militants on a motorcycle shot the two officials down in the southern part of the province,” the source told Anadolu Agency on condition of anonymity.

He added that the militants had immediately fled the scene after killing the two officials.

There has been no claim of responsibility for the attack, while the government has yet to issue a comment.

The Popular Congress Party is headed by ousted president Ali Abdullah Saleh, whose 33-year rule was brought to an end in 2012 by a popular uprising that had begun one year earlier. 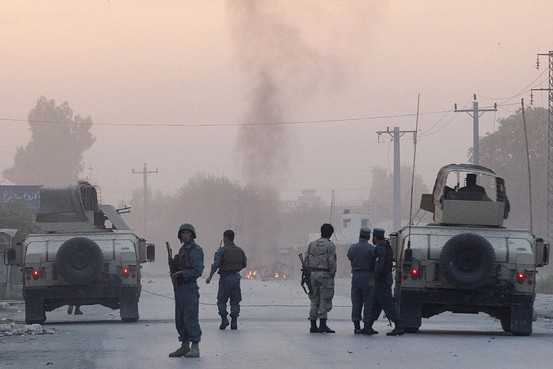 Afghan policemen stand guard at the site of an attack in the city of Jalalabad Saturday. Reuters

About 5 a.m. local time, two attackers drove a car and a truck packed with explosives to the gate of the provincial headquarters of the National Directorate of Security in Jalalabad, eastern Afghanistan’s most important city. The assailants blew themselves up at the entrance, clearing the way for six other insurgents to enter the compound, where they engaged in a firefight with security forces.

“The terrorists got into the building but were quickly gunned down by security forces,” said Hazrat Hussain Mashriqiwal, a local police spokesman.

BAALBEK, Lebanon: One Lebanese soldier is missing after his four comrades were rescued from a militant ambush on the outskirts of the northeastern town of Arsal Thursday morning, according to the Army.

In a statement, the Army said that the militants had ambushed a five-strong unit in the border village of Al-Rahwe, prompting other units to launch an offensive against the gunmen and rescue four.

The Army said its soldiers also destroyed an armored vehicle belonging to the militants that was equipped with an anti-aircraft missile and killed and wounded an unspecified number of gunmen.

However, a security source told The Daily Star that one soldier had died and three others were wounded in the clashes that ensued after an Army vehicle came under fire in the remote village.

BERLIN: Germany said Tuesday that one of its nationals had died in a tense region of Tunisia, after Tunisian officials said police had killed two women at the weekend, mistaking them for members of an armed group.

“The Foreign Ministry must unfortunately confirm that a German national was fatally injured in Kasserine in Tunisia,” a ministry spokeswoman told AFP.

“The German embassy in Tunis is in contact with the relatives as well as the appropriate authorities and is seeking swift clarification,” she added.

According to the German Bild daily, the woman had dual German-Tunisian nationality, was aged 24 and was accompanied by her cousin who also died.