Truth be told, these garbage bag-type swim (sink) wear are dirty, as well as dangerous and offensive. 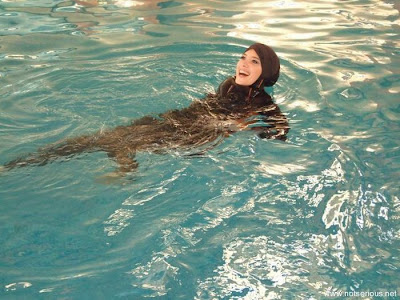 Scores of resorts across Morocco have banned the conservative burkini, in a move that has sparked anger among many in the Muslim country.

Thinking of jetting off to Morocco for a last-minute end-of-summer getaway while staying uber modest? Well now you can’t — because hotels across the traditionally Muslim country have banned the burkini. Scores of resorts across the state have slapped a ban on the halal swimsuit, which covers the body and has a head covering attached, because they claim it’s unclean.

Holiday hotspots across Morocco have been flooded with signs screaming “burkini not allowed,” causing misery for Muslim tourists planning to take a dip. One resort near the economic capital Casablanca told Al Arabiya News that burkinis are not allowed to be worn in the resort, with only “ordinary swim-suits” getting the green light from over-zealous fashion police.

The controversial stunt has sparked fury among activists. Government MP Abdelaziz Aftati has sent a complaint to Tourism Minister Lahcen Haddad, after a woman wearing a burkini was reportedly banned from a swimming pool in al-Jadida, according to local press reports.