It’s all the same enemy and ideology fighting against whatever non-Islamic entity (perceived or otherwise) happens to be in their path at the time.

Is Hamas equal to ISIS? Unknown. But it is beginning to look at least like Hamas hearts ISIS.
By: Lori Lowenthal Marcus
Published: August 24th, 2014 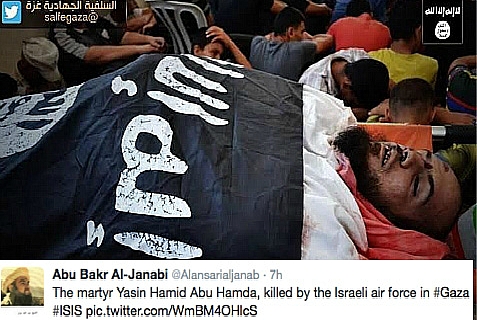 A photograph of the deceased Hamda, tweeted by Abu Bakr al-Janabi, shows the Gazan “martyr” draped in the Black flag of theIslamic State (ISIS or ISIL or IS).

Whether that means Hamas and ISIS share common members, or simply that the brutal genocidal  terrorist organization ISIS is considered by Hamas members to be heroic and a group to emulate, is still unclear.