Islamonazi thugs. This is not an anomaly, a good buddy of mine told me years ago that his son was assaulted in much the same way and on different occasions for wearing a Star of David as well.

Banged up because she was wearing a Star of David in Sweden Photo: Facebook 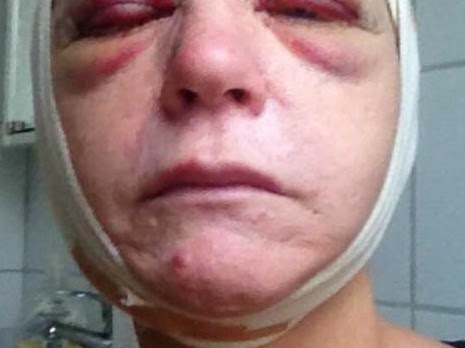 A Swedish Jew, Anna Sjögren, says she was attacked for wearing a Star of David pendant.

Anna says she was walking in the Gottsunda district of Uppsala, which has many Muslim immigrants.  A Muslim girl who saw her pendant cursed and spit in her face.  Anna shoved her back. Then somebody threw a sharp object at her face.  All the witnesses claim Anna slipped and fell.  Anna says that one of the attackers told her that she should shut up or they’ll kill her.  A local security man, also Muslim, took her to the hospital. She did not yet file a complaint, as she does not know who attacked her.

Sweden: was hit hard – because she was wearing a Star of David

Rising anti-Semitism in Sweden: Jew carrying a necklace with the Star of David was attacked by Muslim thugs. “One of the attackers signaled me to ‘Shut up or we’ll kill you.’ According to her testimony, she is afraid to contact the police

Later described that someone threw a sharp object in the direction of her face. “I think it is those who stood next to her, I’m not sure. Everything happened so fast.” Sjögren’s claims were a dozen witnesses, instead of attack, “all teen saw what happened and wore colored scarves Hig’avim or Palestine. They all say, ‘She tripped and fell.’ Nobody hit me, I fell – just unbelievable.” Woman injured in all organs of the body especially the face, the jaw was severely damaged and her eyes are swollen. “Before we got to the hospital, one of the men motioned for me to ‘Shut up or we’ll kill you,” she said fearfully, “Right now I do not know what to do, if not the fashion police – they won , but if you talk to the police, nothing will happen anyway. then I did not see who hit me, and all the witnesses say S’madti. worst is that they get my name and my address. “

Her friend said that following the beating is unable to speak and not see a result of swelling in the eye. “This is a mother of four, a good woman who just walked down the street with a Jewish flavor,” says Anna Berg, a new immigrant from Sweden and a friend of the victim, “is not yet

Went to the police because she was afraid. It’s just absurd that we state in Sweden, a country where I grew up, you can not turn to the police for fear of hitting you. ” later said that a security guard at the scene, also from Muslim, Sjögren’s taken the hospital. should be noted that not one hospital and not security contacted the police. “On Monday she will talk with the security organization of the Jewish community,” said Berg. thing the attackers probably did not know is organizing a major rally Sjögren’s identification with Israel in September, which she promotes on a daily basis. issue is related to its Facebook page, where she wrote “There are days when the Star of David is more significant. I would never take him out. No matter what happens. “When you go hands strengthened responded,” I will stand proud for Israel. I will never let silence me. Am Israel Chai. We will not forget nor forgive. “