And Obama released the worst of the worst (Taliban leaders) for a deserter.

ISIL could pose threat to US, Europe, officials say 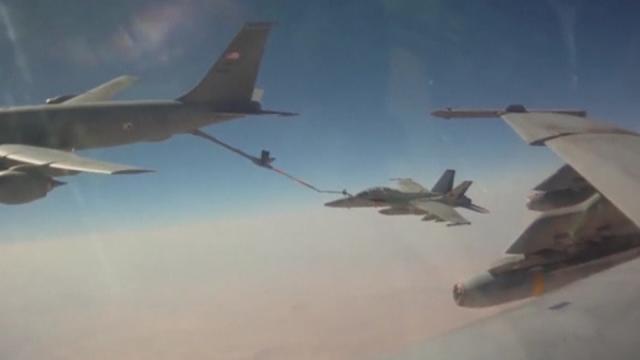 U.S. air strikes not “breaking the threat” of ISIL: Pentagon

U.S. counterterrorism officials have dramatically ramped up their warnings about the threat posed by the Islamic State of Iraq and the Levant (ISIL), concluding that the well-armed group is expanding its ambitions outside the Middle East and may be planning terror attacks against western Europe — and even the U.S. homeland.

ISIL’s conquest of vast swaths of Iraqi territory this spring and summer netted it a “significant” arsenal of U.S. weapons from two Iraqi military bases, including hundreds of tanks, heavily armored Humvees, assault rifles, and rocket-propelled grenade launchers, officials say. One U.S official tells Yahoo News ISIL is now considered “the most potent military force” of any terrorist group in the world.

Led by its charismatic chief Abu Bakr al-Baghdadi, the radical Islamist group is looking beyond its short-term goal of overthrowing the Iraqi and Syrian governments and replacing them with a self-proclaimed Islamic Caliphate. “We’re seeing an expansion of its external terrorist ambitions,” one U.S. counterterrorism official said in a briefing for reporters Thursday. “As its capabilities grow, it has attracted thousands of foreign extremists — some of whom are going home to start cells. As it carves out territory [in Iraq], it wants to go beyond that and do attacks outside. ” U.S. counterterrorism agencies had put the number of ISIL fighters at about 10,000, but that figure is now being reassessed and is likely to be raised, officials say.

Just four years ago the group, then calling itself the Islamic State of Iraq, was scattered and on the run from American forces, aided by Sunni tribes horrified by the group’s often grotesque violence. Its reign has been marked by summary executions, ritual stonings, beheadings and even crucifixions.

What fueled its resurgence? Officials say the group fed off Sunni resentment over the Shia-dominated government of Iraq’s Prime Minister Nouri al-Maliki, who announced his resignation Thursday night. It took advantage of the power vacuum in northern Iraq to seize large chunks of essentially ungoverned territory. It saw an opportunity in recruiting prisoners; in July 2013, its suicide bombers blew their way into the notorious Abu Ghraib prison, freeing up to 500 inmates, including al-Qaida leaders.

These demonstrable successes gave the group new credibility among jihadis around the world, especially after it joined the civil war in Syria and changed its name to ISIL. (It has at times also been known as ISIS, or the Islamic State of Iraq and Syria.) It has since changed its name again to the Islamic State after proclaiming itself a caliphate, the latest in a succession of Muslim empires dating back to the seventh century. Its ranks were soon swelled by foreigners, including hundreds of followers of the red-bearded Chechen militant Omar al-Shishani, a former Georgian army sergeant known for his deep hatred of America.