It’s both amazing and telling that he needs to be told in the first place. 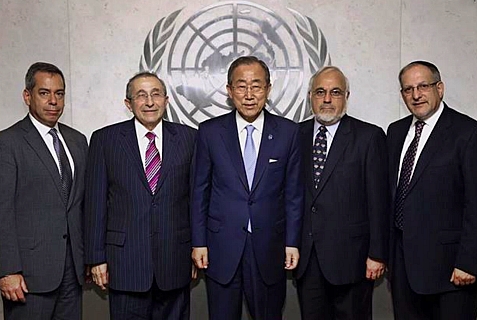 For an entity that maintains access to a lot of important addresses, the Simon Wiesenthal Center sets the mold for firm but polite.

The leadership of the Jewish, pro-Israel Human Rights non-governmental organization met with the secretary general of the United Nations, Ban Ki-moon, on Tuesday, August 13.

Sometimes even people who value diplomacy and access feel compelled to inform a gracious (at least outwardly) host that he’s chosen the wrong party to back. And the SWC leadership was unequivocal in the message they delivered, even while coaching the verbiage in friend-to-friend terms.

After the United Nations meeting yesterday, the SWC presented Ban with a letter detailing the ways in which Hamas is the evildoer in the Gaza conflict, and gently reminding him that the U.N. has been hammering the wrong party – Israel – repeatedly.

After thanking the secretary general for meeting with them, the authors of the letter immediately launch into a bold, unequivocal statement:

we must frankly ask you how many times will the world allow itself to be held hostage to Hamas? This is the third time since 2005 when Israel unilaterally left Gaza that Hamas has brought death and destruction to the people of Gaza. Once again they are using the people of Gaza, the civilian infrastructure and UN facilities in its non-stop campaign to terrorize the Jewish state.