Calling this hack an ”empty suit” is the least offensive word(s) I could come up with to describe this utter loathsome weasel toad.

NOTE: Just look at the pic they chose, an IDF soldier eating a popsicle. My fisking of the article will be included in the text of the YLE propaganda/failed journalism piece.

Tuomioja: Sanctions must be also set on Israel as well 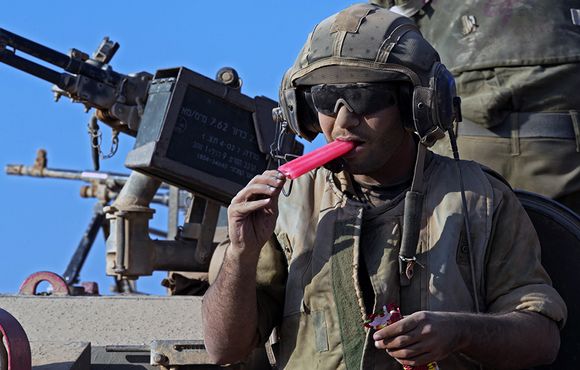 Israeli eats a popsicle in a tank on the way to the Gaza Strip, on July 27.Photo: Atef Safadi / EPA

According to Foreign Minister Erkki Tuomioja (Social Democratic Party), the settlement of the Gaza Strip conflict should be, if necessary, an imposition of sanctions on Israel. In Tuomioja’s opinion, especially the United States should use its influence to bring peace to both Israel and the Palestinians.

[TT: In other words: ”How dare the Jews actually make gains against their sworn enemies who seek their total annihilation, we have to take actions to stop their stopping of Hamas rockets/mortar attacks and tunnel infiltrations into Israeli territory.” Also, it’s yet again another fine example of an idiot hack politician pontificating on issues he’s clueless about. How can you ”bring peace” between Arabs who are trying their best to murder Jews and destroy their country, and Jews who are refusing to be exterminated? The West couldn’t bring peace with Adolf’s Hitler and Tojo’s Japan, until they were soundly defeated, same with Israel’s fight against Arab totalitarian /genocidal maniacs.]

The Israeli army has continued to strike the Gaza Strip after a brief cease-fire. Number of victims of the conflict have risen to over one thousand. The UN Security Council has so far been in vain calling for an immediate ceasefire in Gaza for humanitarian reasons.

[TT: Israel held to the Hamas’ own initiated ‘cease-fire’, then resumed hostilities after Hamas violated it. YLE refuses yet again to print the facts and any kind of context.]

According to Foreign Minister Erkki Tuomioja in a YLE Radio 1  morning interview, the international community should be prepared through the UN Security Council, to set sanctions for all parties involved in resolving the conflict in Gaza. According to Tuomioja, sanctions should also be applied to Israel.

[TT: Typical moral equivocation, both sides are fighting, so both are alike, except that Israel has to be held to a higher standard, so it will be forced to provide all the incentives for peace, not the Arabs, whom these Europeans treat as children because they can’t behave according to Western norms. It’s called humanitarian racism.]

– In this situation, there should be a preparation to target particular types of sanctions and embargo measures and restrictions on Israel and the Palestinians. Hamas is a terrorist organization, which we shouldn’t have any dealings with it, but if Israel is guilty of such excesses, as we have seen, or has not been ready to move forward in the peace process, then yes it too should have consequences, Tuomioja said.

[TT: Here Tuomioja delves into bald faced lying, he wants us to believe that he would under no circumstance have any dealings with the Hamas, when all along he’s biting at the bit to have these Islamonazis at the bargaining table in some kind of deal making venture where Western funds and incentives be handed over in exchange for some vague statement by the Hamas that it’s forgoing violence and accepts Israel’s existence, when all along we know for a fact that lying to the non-believer is part and parcel in Islamic-non-Islamic discourse. Who knows, Tuomioja (old Scruffy) might even know about that, but will be more than willing to use it as a fig leaf to force Israel into negotiations with these terrorists.]

According to Tuomioja, above all, a lasting peace should be sought in the Israeli-Palestinian conflict.

– The cease-fire should be set, of course, immediately, but it will not last more than a few years, when we are again in the same situation unless this issue itself is addressed.

[TT: Again, a complete disconnect from reality on the ground, you simply can’t make a ”peace’ with those calling for your complete destruction, only a complete victory in war will solve that.]

There is no consensus among  the UN Security Council’s member states in resolving the crisis. In particular, the United States is not, according to Tuomioja, ready to exert all of its influence to resolve the conflict.

– The UN Security Council’s opportunities to address the Israeli-Palestinian conflict are linked to the United States, which is Israel’s most important supporter.

[TT: Thankfully at least on half of one third of the government is in the hands of true friends of Israel, If it was all Democrat, fur face would get his wish.]

Tuomioja says that the escalation of the crisis has been raised in the EU, in the discussion that the Union should have a stronger influence on the parties in the Middle East conflict. Except for sanctions, the parties, according to Tuomioja should be given incentives to achieve a peace agreement.

– The EU has been talking about the fact that if peace occurs, we are prepared for a new Palestinian state and to allow Israel to further interests in the European market.

[TT: More tomfoolery from Tuomioja, who, like most if not all hardcore Leftists, care not for history, each day is a new page for these utopians who reject human experience and reality. Hamas (and Fatah) cares not for open markets, but for Israel’s destruction and eventual takeover of the West. Get it?]

UPDATE: This is how to talk to fools like Tuomioja: