Yes ladies and gentlemen, this is in fact the most hostile U.S. government towards it’s ally Israel that has ever been. There have been runners up in the past, but this one takes the cake by far. Whether it’s placating Islamonazis of the Hamas or Fatah, Obama has got their (read= not Israeli nor US) best interests at heart.

Shame on Kerry: US comes down on side of Hamas 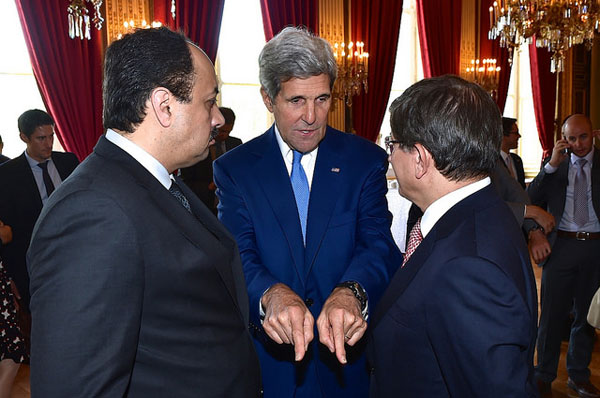 This is absolutely incredible (or, sadly, maybe not). Let me quote Ha’aretz diplomatic writer Barak Ravid, anything but a right-winger:

The draft [cease fire agreement] Kerry passed to Israel on Friday shocked the cabinet ministers not only because it was the opposite of what Kerry told them less than 24 hours earlier, but mostly because it might as well have been penned by Khaled Meshal. It was everything Hamas could have hoped for.

The document recognized Hamas’ position in the Gaza Strip, promised the organization billions in donation funds and demanded no dismantling of rockets, tunnels or other heavy weaponry at Hamas’ disposal. The document placed Israel and Hamas on the same level, as if the first is not a primary U.S. ally and as if the second isn’t a terror group which overtook part of the Palestinian Authority in a military coup and fired thousands of rockets at Israel. …

The secretary of state’s draft empowered the most radical and problematic elements in the region – Qatar, Turkey, and Hamas – and was a slap on the face to the rapidly forming camp of Egypt, Israel, the Palestinian Authority, Jordan, Saudi Arabia, and the United Arab Emirates, who have many shared interests. What Kerry’s draft spells for the internal Palestinian political arena is even direr: It crowns Hamas and issues Palestinian President Mahmoud Abbas with a death warrant.

This is so upside-down that it defies parody. The biggest war criminals on the planet launch an unprovoked attack against Israel’s civilian population, fire hundreds of rockets from behind the skirts of their own civilians and prepare a mass-casualty terrorist attackthat would rival anything al-Qaeda has been able to pull off. They are stopped only by Israel’s virtually miraculous technology and actually miraculous good luck.