The weeklong battle in Tripoli began when Islamist-led militias — mostly from the western city of Misrata — launched a surprise assault on the airport, under control of rival militias from the western mountain town of Zintan.

The clashes resumed Sunday after cease-fire efforts failed. On Monday, the burned-out shell of an Airbus A330 sat on the tarmac, a $113 million passenger jet for Libya’s state-owned Afriqiyah Airways destroyed in the fighting

A suicide driver rammed his explosive-laden car into a police checkpoint at the entrance to Baghdad‘s Khazimiyah district killing 21 people, including seven policemen manning the post.

Police officials said there was a long line of cars at the checkpoint at the time of the attack. At least 35 people were wounded, according to police and hospital officials.

Baghdad has been on edge since the Sunni militant blitz led by the Islamic State extremist group seized the northern city of Mosul, vowing to push south to the capital.

The city has seen several small scale bombings in recent weeks, but it has so far been free of the large, coordinated attacks. 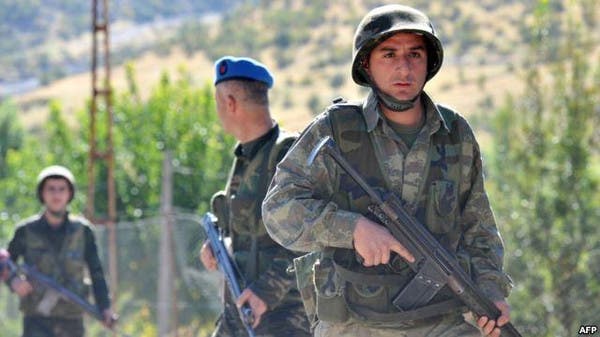 Two Turkish soldiers were killed in a clash with suspected smugglers near the Syria border, a local official said on Tuesday, according to Reuters news agency.

“Two soldiers were killed and another was wounded, we know the other group suffered many casualties,” he told journalists.

Security in the area was heightened, with armoured vehicles deployed, Kucuk said.

Sources said in continuation of security forces operation Zarb-e-Azb, terrorists’ sanctuaries located near the Pak-Afghan border in Tehsil Shawal were targeted by jet fighters and 4 of them were completely destroyed, killing 13 suspected militants.

The deceased terrorists could not be identified immediately, as operation in the area is still underway.

In this June 16, 2014 photo, Mahmoud Bazzi, whom the Irish government calls a suspect in the abduction, torture and killing of two Irish soldiers serving as United Nations peacekeepers in Lebanon 34 years ago, speaks at his home in Dearborn, Mich. Bazzi was arrested Tuesday, July 15, 2014 by U.S. authorities at his Dearborn home for “administrative immigration violations” and not directly in connection to the killings in Lebanon, spokeswoman Gillian Christensen told The Associated Press. (AP Photo/Detroit Free Press, Brian Kaufman)

A Michigan ice cream truck operator alleged to have participated in the killing of two Irish United Nations peacekeepers in his native Lebanon more than three decades ago has been arrested over an immigration violation stemming from entering the U.S. with a passport that wasn’t his, the Detroit Free Press reported.

Two eyewitnesses — a former Irish U.N. peacekeeper and a former Beirut correspondent for the Associated Press — said 71-year-old Mahmoud Bazzi of Dearborn shot the peacekeepers in 1980.

The Detroit Free Press ran an investigative report based on interviews with all of the main players in the drama who are still alive, including the relatives of those killed, U.S. government officials and Bazzi.

During the interim years, U.S. authorities would occasionally inquire about the violent event, the witnesses said, but it wasn’t until last Tuesday that Homeland Security officers arrested Bazzi over an immigration violation after entering the U.S. 21 years ago with someone else’s passport, a charge that could have him deported back to Lebanon.