It’s just too bad that they have these antisemitic 7th century throwbacks in their country, but they themselves (Dutch/EU elites) willingly invited them in.

UPDATE: Meanwhile, over at Bad News from The Netherlands

In The Hague, on Saturday, hundreds of demonstrators protested against Israel.  Some of them carried placards equating the Israeli flag with swastikas.  Others carried placards with “Stop doing what Hitler did to you”.  There were also flags of ISIS, the terror organization responsible for murdering thousands in Iraq and Syria.  The meeting was organized by the Palestine Committee, and the spokesman of the Palestinian diplomatic representation addressed the crowd.  Many of the demonstrators were Muslims. The Dutch police stood by. 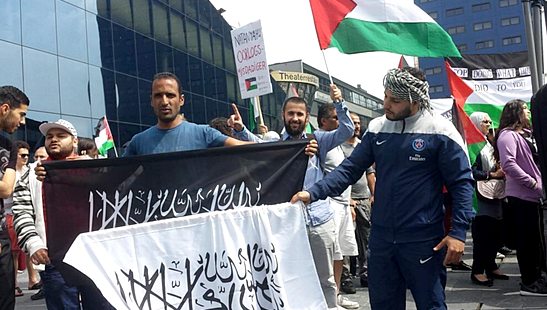 When the latest round of missile attacks against southern Israel by Hamas began a few weeks ago, it seemed timed to accompany Israel’s attempt to recover the three teenagers abducted in the West Bank. Then, after the missing boys were found dead and a Palestinian teenager was killed in seeming reprisal, the number of rockets from Gaza increased.

For the first couple of weeks of attacks, Israel relied on its Iron Dome defenses; additional air responses were limited. During this time world leaders called on Israel to exercise “restraint”, and urged “both sides” not to risk the “peace process”. Outside of Israel there was no virtually no vigorous official condemnation of the aggressive rocket attacks by Hamas targeting civilians.

Then, when Israel began to actively defend itself — after the air raid sirens went off in Tel Aviv and Jerusalem — the world leapt to its feet in predictable outrage against this “disproportionate response”. The Palestinian flags and “Israel = Hitler” signs were brought out of storage and marched around the public squares of capital cities. Pro-Palestinian demonstrators railed against Israeli “war crimes” and attacked pro-Israel counter-demonstrators.

One such demonstration was mounted this afternoon in The Hague. A source in the PVV just sent us the following email:

Just now anti-Israel demo in the Hague, people with jihad and Israel=Nazi signs.

Incredible and disgusting. The police are not intervening.

Geert Wilders just tweeted that Holland is no Syria, and we are no Caliphate. People with those flags should be arrested, detained, stripped of the Dutch nationality and send abroad and never be allowed to return.

In the photo at the top of this post, you’ll notice al-raya, the black flag of jihad, being displayed proudly by the demonstrators. The supporters of Palestinian rocketeers are calling for a holy war against Israel. Do their leftist allies realize this fact? Do they care?

The young man sporting the keffiyeh in the right foreground is wearing a shirt with a “Fly Emirates” logo. I wonder if that’s where the funding comes from for all those banners, Pali flags, and expensively-printed swastika signs.

A sign in the background reads “Natanyahu [sic] War Criminal” in Dutch. 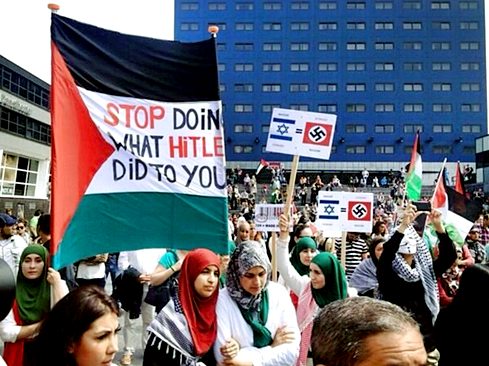