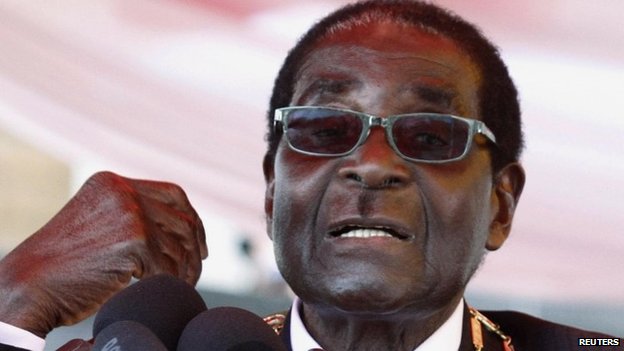 Mr Mugabe has ruled since independence in 1980

“We say no to whites owning our land and they should go,” Mr Mugabe told his supporters at a rally.

The white farmers union said it was regrettable that racial tensions were flaring up again.

The president’s critics say his policy of seizing most of Zimbabwe’s white-owned farms caused the country’s economic collapse from 2000-2009.

Mr Mugabe, 90, has governed Zimbabwe since independence in 1980.

He was re-elected president last year with 61% of the vote, defeating his long-standing rival Morgan Tsvangirai.

The president’s Zanu-PF party also gained a parliamentary majority of more than two-thirds, winning 160 of the 210 seats.

It appears that Mr Mugabe wants to deflect attention from Zimbabwe’s economic crisis, especially worsening unemployment and the closure of firms, our correspondent says.