Never mind the fact that ‘Black Pete’ has nothing to do with racism.

Children used to be scared of Black Pete, but no longer. “Black Pete is going to put you in the bag to Spain if you don’t behave!” is something only old geezers (such as myself…) remember from their childhood. Today Black Pete is an amiable figure, well loved by children. In fact, some kids are more afraid of Saint Nicholas than Black Pete. Black Pete makes funny faces and gives them candy. Saint Nicholas is a stern-looking prelate of the church. Given the track record of RC prelates, who can blame them? 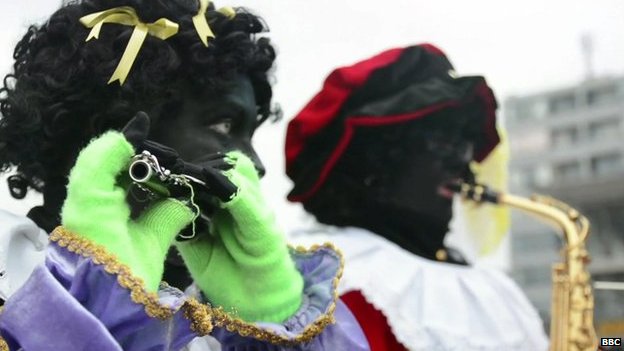 Black Pete, the traditional sidekick to the Dutch St Nicholas is a “negative stereotype of black people”, a court in Amsterdam has ruled.

It said the capital must review the character’s involvement in the annual festivities in November-December.

The Dutch version of the St Nicholas legend has him and armies of Black Petes arriving by steamboat from Spain.

On Thursday, Amsterdam’s regional court said the “image of Black Pete with his thick red lips, being a stupid servant, gives rise to a negative stereotyping of black people”.

It said “many black Amsterdammers felt discriminated against”.

The court added that the mayor now had six weeks to review the traditional festival – the biggest date on the Dutch calendar.

Supporters of the ban say Black Pete (or Zwarte Piet) is a racist throwback to the times when black people were enslaved by the Dutch in the country’s overseas colonies.